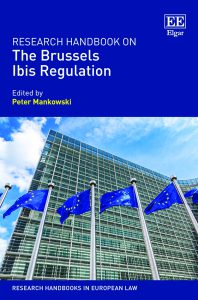 A most useful new research handbook in European Law is on the table – highly recommended! The publisher’s blurb reads:

„The Brussels Ibis Regulation is the magna carta for jurisdiction and the free circulation of judgments in civil and commercial matters in the EU, and forms a cornerstone of the internal market. This timely Research Handbook addresses the cutting edges of the regime, in particular its place within the overall system of EU law and its adaptations in response to specific kinds of lawsuits or the needs of particular industries.  Read more...

by Xandra Kramer on June 2, 2015
A new Research Handbook on EU Private International Law, within the Edward Elgar Research Handbooks in European Law series  has just been published. It is edited by Peter Stone, Professor and Youseph Farah, Lecturer, School of Law, University of Essex, UK.

It contains the following contributions:

1. Internet Transactions and Activities
Peter Stone
2. A Step in the Right Direction! Critical Assessment of Forum Selection Agreements under the Revised Brussels I: A Comparative Analysis with US Law
Youseph Farah and Anil Yilmaz-Vastardis

3. Fairy is Back – Have you got your Wand Ready?
Hong-Lin Yu

4. Frustrated of the Interface between Court Litigation and Arbitration? Don’t Blame it on Brussels I! Finding Reason in the Decision of West Tankers, and the Recast Brussels I
Youseph Farah and Sara Hourani  Read more...

Dublin Up on Rome I

Following the conference to take place at University College Dublin this week, details of a second conference to take place in the Irish capital on the subject of the Rome I Regulation have been announced.  This conference, organised by Trinity College Dublin, is entitled “The Rome I Regulation on the Law Applicable to Contractual Obligations: Implications for International Commercial Litigiation” and includes several of the speakers who participated in the organisers’ earlier successful conference on the Rome II Regulation (for the published papers of which, see here).

The programme is as follows:

There is a veritable feast of articles, casenotes and book reviews in the latest issue of the Lloyd’s Maritime & Commercial Law Quarterly. They are:

Analyses case law on whether the English courts will exceptionally disregard the separate legal personality of foreign incorporated entities in litigation, applying English or foreign company law. Discusses the jurisdiction to order remedies against shareholders on the ground that incorporation was a sham. Considers the nature of limited liability under English law.

This book focuses on harmonization of conflict laws at the European Community level, which has been driven by the introduction of a series of conventions and regulations. It offers critical assessment of these advances across four main areas of concern: civil jurisdiction and judgments; the law applicable to civil obligations; family law; and insolvency.

Specifically, the measures examined and evaluated include:

Private International Law and Venezuelan Academia in 2019: A Review

In 2019 the Venezuelan Private International Law (hereinafter “PIL”) academic community made clear that, despite all the difficulties, it remains active and has the energy to expand its activities and undertake new challenges.

As an example of this we have, firstly, the different events in which our professors have participated and the diversity of topics developed by them, among which the following stand out:  Read more...

(I am grateful to Prof. Francesca Villata – University of Milan – for the following presentation of the latest issues of the RDIPP)

The first and second issues of 2017 of the Rivista di diritto internazionale privato e processuale (RDIPP, published by CEDAM) were just released.