The HCCH and and the Istanbul Bilgi University, Department of Private International Law, are organising a webinar on the 1996 Hague Child Protection Convention on 6 December 2022, 3 pm-5 pm (GMT +3).

The HCCH 1996 Child Protection Convention has been occupying a crucial spot for the protection of children in today’s globalized world, for more than 25 years. Experts from several countries, including central authority representatives, will discuss the convention, which tries to ensure that children are affected by intrafamilial disputes as little as possible, and will share their experiences as regards its application.

The webinar plan is as follows:

Written by Hans van Loon, former Secretary General of the HCCH and Honorary Professor of the University of Edinburgh Law School

As reported in this blog before (see CSDD and PIL: Some Remarks on the Directive Proposal), the European Commission on 23 February 2022 adopted a proposal for a Directive on corporate sustainability due diligence.

While some of the recommendations proposed by GEDIP last year are reflected in the Draft Directive, the Draft fails to follow up on several crucial recommendations concerning judicial jurisdiction and applicable law. This will detract from its effectiveness.

Prof Dr Verónica Ruiz Abou-Nigm (Chair of Private International Law, School of Law, University of Edinburgh) will focus on the role of private international law in implementing the sustainable development goals (SDGs) of the United Nations 2030 Agenda and highlight, however, that it is essential to assess the impact of contemporary approaches in PIL on the realisation of the SDGs in a changeable legal landscape. She was one of the editors of the volume The Private Side of Transforming our World (Intersentia, 2021), which demonstrates that private international law is as an integral part of the global legal architecture needed to turn the SDGs into reality.

The event will be moderated by Prof Laura Carballo Piñeiro of the Universida de Vigo.

The United Nations Convention on Contracts for the International Sale of Goods (‘CISG’), currently adopted by 95 States, is a treaty intended to harmonise the laws governing cross-border goods trade: and thereby promote trade itself.  So much is made clear in its Preamble:

The States Parties to this Convention, …

Being of the opinion that the adoption of uniform rules which govern contracts for the international sale of goods and take into account the different social, economic and legal systems would contribute to the removal of legal barriers in international trade and promote the development of international trade,

Have agreed as follows: …

Art. 7(1) CISG’s instruction for interpreters to have regard ‘to its international character and to the need to promote uniformity in its application and the observance of good faith in international trade’ establishes a requirement of autonomous interpretation.  This, in turn, facilitates the CISG’s global jurisconsultorium: whereby courts, arbitrators, lawyers, academics, and other interested stakeholders can influence and receive influence in relation to the CISG’s uniform interpretation.  A recent publication edited by Peng Guo, Haicong Zuo and Shu Zhang, titled Selected Chinese Cases on the UN Sales Convention (CISG) Vol 1, makes an important contribution to this interpretative framework: presenting abstracts and commentaries addressing 48 Chinese CISG cases spanning 1993 to 2005, that may previously have been less accessible to wider international audiences.  Read more...

https://conflictoflaws.net/News/2020/08/CoL_Banner-1.png 0 0 Michael Douglas https://conflictoflaws.net/News/2020/08/CoL_Banner-1.png Michael Douglas2022-11-21 03:22:142022-11-21 03:22:14Chinese Case Law Collection Adds to the CISG’s Jurisconsultorium: Reflections on the United Nations Convention on Contracts for the International Sale of Goods and its Domestic Implementations

This post was written by Pietro Franzina and Thalia Kruger, and is being published simultaneously on Conflictoflaws.net and on the EAPIL blog.

The delegations of more than thirty Member States of the Hague Conference on Private International Law attended the first meeting of the Special Commission charged with reviewing the operation of the Hague Hague Convention of 13 January 2000 on the international protection of adults of 13 January 2000 on the international protection of adults. The meeting took place in The Hague and online from 9 to 11 November 2022 (for a presentation of the meeting, see this post on Conflictsoflaw.net and this one on the EAPIL blog). A dozen organisations, governmental and non-governmental (including the Council of the Notariats of the European Union, the Groupe Européen de Droit International Privé and the European Association of Private International Law), were also in attendance.

The discussion covered a broad range of topics, leading to the conclusions and recommendations that can be found on the website of the Hague Conference. The main takeaways from the meeting, as the authors of this post see them, are as follows.

To begin with, the Special Commission affirmed that the Convention works well in practice. No major difficulties have been reported either by central authorities instituted under the Convention itself or by practitioners.  Read more... 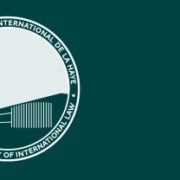 For anyone interested in the area of private international law, the Hague Academy of International Law and its Summer Courses on Private International Law have been one of the must-do’s ever since the Academy opened its doors in 1923. Each year, hundreds of students, academics and practitioners attend the courses given by renowned lecturers, while the Academy also offers multiple social and embassy visits, an access to the famous Peace Palace Library, as well as ample opportunities for discussion between the attendees who all come from different backgrounds. It seems that this report comes in quite timely as the programme for the 2023 Summer Course has just been announced.  Read more...

Governments with no realistic prospect of paying their debts often gamble for redemption, trying desperately to avoid default. Political leaders, with good reason, fear that a debt default will get them thrown out of office. But in trying to hold power, sometimes by borrowing even more, they often make matters worse for the country and its people. A prime example involves the collateralized bonds issued by Venezuelan state oil company, PDVSA.  Read more...

Choice-of-law rules can be complex, confusing, and difficult to apply. Nevertheless, they are vitally important. The application of choice-of-law rules can turn a winning case into a losing case (and vice versa). A recent decision in the U.S. Court of Appeals for the Second Circuit, Petróleos de Venezuela S.A. v. MUFG Union Bank, N.A., is a case in point. The Second Circuit was called upon to decide whether to apply the law of New York or the law of Venezuela to determine the validity of certain notes issued by a state-owned oil company in Venezuela. Billions of dollars were riding on the answer.

In 2016, Venezuela’s state-owned oil company, Petróleos de Venezuela, S.A. (“PDVSA”) approved a bond exchange whereby holders of notes with principal due in 2017 (the “2017 Notes”) could exchange them for notes with principal due in 2020 (the “2020 Notes”). Unlike the 2017 Notes, the 2020 Notes were secured by a pledge of a 50.1% equity interest in CITGO Holding, Inc. (“CITGO”). CITGO is owned by PDVSA through a series of subsidiaries and is considered by many to be the “crown jewel” of Venezuela’s strategic assets abroad.  Read more...

The following comment has been kindly provided by Sarah Ott, a doctoral student and research assistant at the University of Freiburg (Germany), Institute for Comparative and Private International Law, Dept. III.  Read more...

As previously reported on conflictoflaws (inter alia), on 1 December 2020, the Grand Chamber of the CJEU ruled in the FNV v. Van Den Bosch case. It ruled that the highly mobile labour activities in the road transport sector fall within the scope the Posting of Workers Directive (C-815/18; see also the conclusion of AG Bobek). As regards to the specific circumstances to which the directive applies, the CJEU sees merit in the principle of the ‘sufficient connection’. To establish sufficient connection between the place of performance of the work and a Member State’s territory, ‘an overall assessment of all the factors that characterise the activity of the worker concerned is carried out.’ (FNV v. Van Den Bosch, at [43]).
Following the preliminary ruling, on 14 October 2022, the Supreme Court of the Netherlands has ruled in cassation on the claims, which had led to the questions for preliminary rulings (see also the conclusion of AG Drijber). The Dutch Supreme Court referred the assessment of the ‘sufficient connection’ on the facts of the case back to the lower courts.
Although the Dutch Supreme Court’s ruling is not surprising, the eventual application the CJEU’s preliminary ruling to the facts of this dispute (and its further follow-up in lower courts) might still provide food for thought for companies in the transnational transport sector, which use similar business models.