Update on the case Monasky v. Taglieri on the determination of habitual residence under the Hague Child Abduction Convention currently before the US Supreme Court

For those of you who are interested in the case Monasky v. Taglieri currently before the US Supreme Court, please note that an extremely useful amicus curiae brief was filed this week by Reunite International Child Abduction Centre (as stated on its website Reunite is the “leading UK charity specialising in parental child abduction and the movement of children across international borders”).  This brief will certainly help put things into perspective with regard to the weight that should be given to parental intent when determining the habitual residence of the child under the Hague Child Abduction Convention (but it only answers the second question presented).  Read more...

This article analyses the eagerly awaited the UK Supreme Court judgment in Cape Intermediate Holdings Ltd v Dring, unanimously delivered on 29th July 2019. Broadly speaking, the case concerned the scope and operation of the constitutional principle of open justice. More precisely, the questions before the Supreme Court were how much of the written material placed before a court in a civil action should be accessible to persons other than the parties to the proceedings, and how such access should be facilitated.  Read more...

Benedikt Windau, Judge at the Oldenburg District Court (Landgericht Oldenburg), runs a very interesting blog (in German), focusing on German Civil Procedure. In one of his recent postings, he presented a very interesting judgment of the Frankfurt CoA, related to the Service Regulation. Upon my request, he prepared an English version of his post for our blog.

A recent ruling of the Frankfurt Court of Appeals (Docket No. 13 U 210/17) will potentially shake up the (German) law of cross-border service quite a bit, as it imposes new, hence unknown obligations on the plaintiff – and its legal counsel accordingly.  Read more...

Carlos Santaló Goris is a researcher at the Max Planck Institute Luxembourg for International, European and Regulatory Procedural Law, and Ph.D. candidate at the University of Luxembourg. He offers a summary and an analysis of AG Spuznar’s Opinion on the Case C-555/18, K.H.K. v. B.A.C., E.E.K.

Less than three years after Regulation 655/2014 establishing a European Account Preservation Order (“the EAPO Regulation”) entered into force, the Court of Justice of the European Union (“CJEU”) released its first Opinion on this instrument. This regulation established a uniform provisional measure at the European level, which permits creditors the attachment of bank accounts in cross-border pecuniary claims. In many senses, the EAPO regulation represents a huge step forward, particularly in comparison to the ex-ante scenario regarding civil provisional measures in the Area of Freedom, Security and Justice.  It is no accident that in the first line of the Opinion, AG Szpunar refers to the landmark case Denilauler.  Besides the concrete assessment of the preliminary reference, he found a chance in this case to broadly analyse the EAPO Regulation as such, contextualizing it within the general framework of the Brussels system.  Read more...

Cem Veziroglu, doctoral candidate at the University of Istanbul and research assistant at Koc University Law School has provided us with an abstract of his paper forthcoming in the European Company and Financial Law Review.

The resolution of corporate law disputes by arbitration rather than litigation in national courts has been frequently favoured due to several advantages of arbitration, as well as the risks related to the lack of judicial independence, particularly in emerging markets. While the availability of arbitration appears to be a major factor influencing investment decisions, and there is a strong commercial interest in arbitrating corporate law disputes, the issue is unsurprisingly debated in respect of certain characteristics of the joint stock company as a legal entity. Hence the issue comprises a series of legal challenges related to both corporate law and arbitration law.  Read more...

CJEU confirms that an actio pauliana is a matter relating to a contract: Case C-722/17 Reitbauer et al v Casamassima

Less than a year after its decision in Case C-337/17 Feniks (discussed here), the Court of Justice had another opportunity to consider the extent to which the Brussels Ia Regulation provides a head of special jurisdiction for an actio pauliana. In Case C-722/17 Reitbauer (decided last Wednesday but still not available in English), the Court confirmed its decision in Feniks, according to which such an action falls under Art 7(1) Brussels Ia if it is based on a contractual right. Michiel Poesen, PhD candidate at KU Leuven, has been so kind as to share his thoughts on the decision with us in the following post.

Earlier this week, the Court of Justice of the European Union found that an actio pauliana is subject to jurisdiction in matters relating to a contract, contained in Article 7(1) Brussels Ia (Case C-722/17 Reitbauer).  Read more...

Anna Bizer, doctoral candidate at the University of Freiburg, has kindly provided us with her thoughts on AG Szpunar’s opinion in the case of Glawischnig-Piesczek v Facebook Ireland (C-18/18).

Since the EP-proposal from 2012, the European Union has not shown any efforts to fill the gap still existing in the Rome II Regulation regarding violations of personality rights (Article 1(2)(g)). However, Advocate General Szpunar has just offered some thoughts on the issue in his opinion on the case of Eva Glawischnig-Piesczek v Facebook Ireland Limited (C-18/18) from 18 June 2019.  Read more...

Prepared by Cara North, external consultant to the Permanent Bureau of the Hague Conference on Private International Law (HCCH). This post reflects only personal views.

Today marks a momentous occasion (in the private international law world at least): the conclusion of the Diplomatic Session on the HCCH Convention on the Recognition and Enforcement of Foreign Judgments in Civil or Commercial Matters (“Judgments Convention”). A Convention that, as noted by the Secretary General of the Hague Conference on Private International Law (“HCCH”) during his opening remarks for the Session, will be a “gamechanger for cross-border dispute settlement and an apex stone for global efforts to improve real and effective access to justice.”  Read more...

DONE! An important day for global justice and the Hague Conference on Private International Law 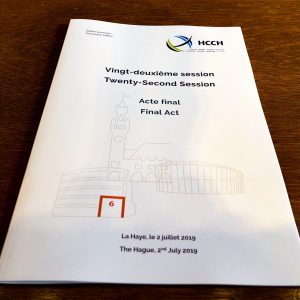 The Minister emphasised that the new Convention: “enhances the legal certainty and predictability that is so important in international legal matters…”.  Read more... 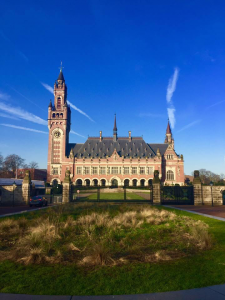 Posted for the Permanent Bureau of the Hague Conference on Private International Law:

Today, the HCCH finalised the text for a new multilateral treaty: the 2019 HCCH Convention on the Recognition and Enforcement of Foreign Judgments in Civil or Commercial Matters.

The 2019 HCCH Judgments Convention will be a single global framework, enabling the free circulation of judgments in civil or commercial matters across borders. It will be essential to reducing the transactional and litigation costs in cross-border dealings and to promoting international access to justice. It will provide a legal regime that further increases certainty and predictability in cross-border dealings, promotes the better management of transaction and litigation risks, and which shortens timeframes for the recognition and enforcement of a judgement in other jurisdictions.  Read more...