The current issue of Lex & Forum explores the existing status of Private International Law & the Internet, and tries to map out solutions and proposals for the future.

The issue benefits from the privilege of hosting papers of two worldwide leading figures in the area of private international law: Professor Dan Svantesson is sharing his insightful conclusions about the current state of the interplay between Private International Law & the Internet and, also, points at the critical problems that need to be addressed in order to secure a better digital future. In doing so, he sets the tone of the entire issue. At the same time, Professor Symeon Symeonides offers a fascinating account of a much needed international coordination effort. After explaining the current status of addressing internet related personality infringemetns accross different jurisdictions, Prof. Symeonides focuses on the initiative of the Institut de Droit International (IDI), which at its 79th biennial session adopted a critical Resolution on internet related personality infringements and Private International Law. Prof. Symeonides explains vividly how this transnational initiative improves over existing regional approaches and offers great insights on its history, rationale and development.  Read more...

The Centre for Studies and Research in International Law and International Relations Series at Brill has just issued its 23rd volume, edited by Hannah Buxbaum and Thibaut Fleury Graff.

The Centre for Studies and Research in International Law and International Relations of the Hague Academy of International Law is designed to bring together highly qualified young international lawyers from all over the world, to undertake original research on a common general theme which is determined annually by the Curatorium of the Academy. The Centre is sub-divided in an English-speaking and French-speaking section. The research undertaken at the Centre is published in a collective volume containing the reports of the Directors and the best contributions from the participants. In 2019, the Directors were Hannah Buxbaum and Thibaut Fleury Graff, and their fascinating cross-over topic was „extraterritoriality“.

The blurb reads as follows: „Extraterritoriality is a challenging concept as a matter of international law and policy, raising fundamental questions about the allocation of power among States. It is also a dynamic concept, reflecting and responding to shifts in the global economy, patterns of human behavior, and understandings of state sovereignty.“

The second issue of 2022 of the Rivista di diritto internazionale privato e processuale (RDIPP, published by CEDAM) was just released. It features:

Carlos Santaló Goris, Research Fellow at the Max Planck Institute Luxembourg for International, European and Regulatory Procedural Law and Ph.D. candidate at the University of Luxembourg, offers an analysis of the reform recently approved in Luxembourg concerning the functioning of the information mechanism of the Regulation No 655/2014, establishing a European Account Preservation Order (“EAPO Regulation”). The EAPO Regulation and other EU civil procedural instruments are the object of study in the ongoing EFFORTS project, with the financial support of the European Commission.

The EAPO Regulation introduced the first European civil interim measure that permits, as its name indicates, the provisional attachment of the debtors’ bank accounts in cross-border civil and commercial claims. Besides the temporary attachment of debtors’ funds, it also contains a special tool to search for the bank accounts containing those funds. This information mechanism is perhaps one of the main appeals of the EAPO. It has even inspired some national legislatures, for instance, the French one, to improve their domestic mechanisms to trace debtors’ assets in civil proceedings. Nonetheless, access to the EAPO’s information mechanism is more limited than access to the EAPO itself. Whereas creditors without a title can apply for an EAPO, they cannot submit a request to search for debtors’ bank accounts. This option is limited to creditors with a title, whether the title is enforceable or not.  Read more...

“Foreign-Corporation Regulations and Private International Law: With a Case Study on Derivative Action”.

The globalization of enterprise organization as well as activities causes more serious labour issues, environmental issues, human rights issues and so on. The corporate law rules on duties and responsibilities of corporate directors are regarded as a tool for corporate governance and
compliance.
Based on the current position for the lex incorporationis as well as the internal-affairs doctrine, the breach of duties and responsibilities of directors and the shareholder’s standing for derivative action would be ruled by the lex incorporationis, except for the application of overriding mandatory rules of lex fori.
However, the existence of foreign-company regulations in different jurisdictions like California, New York, Hongkong, Netherland etc. might lead us to a theoretical reflection, as they could impose regulations severer than lex incorporationis on directors and there is no room for such regulations of third countries other than lex incorporationis and lex fori to be applied within the conventional framework of P.I.L.
This presentation will shed lights on this theoretical issue, introducing practical case-study analysis on derivative action, and suggest several problematic points to be tackled in further studies.  Read more...

Proposals for conference presentations and short presentations at the fourth conference for young German-speaking scholars in private international law (“IPR-Nachwuchstagung”) in February 2023 can be submitted until 12th September 2022.

The organisers are welcoming all contributions by young scholars that deal with the theme of the conference “Deference to the foreign – empty phrase or guiding principle of private international law”. The call for papers and further information can be found on the conference website.

Although the conference will mainly be held in German, English proposals and presentations are also most welcome.

(These abstracts can also be found at the IPRax-website under the following link: https://www.iprax.de/en/contents/)

J. Richter: Cross-border service of writs of summons according to the revised EU Service Regulation

The service of judicial documents, particularly the service of writs of summons, is of central importance in civil proceedings. In cross-border proceedings, service of legal documents poses particular problems, which are addressed by the European Regulation on the Service of Documents. The revision of this regulation, which will enter into force on 1 July 2022, provides an opportunity to examine the current and future rules by taking the example of the international service of writs of summons.  Read more... 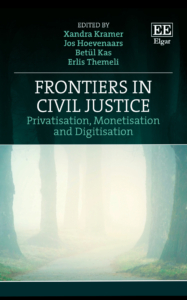 The book is the third edited volume resulting from the project Building EU Civil Justice, funded by an ERC consolidator grant, at Erasmus School of Law at Erasmus University Rotterdam. Twenty authors from a wide range of countries and with different backgrounds have contributed.

The book studies three interrelated frontiers in civil justice from a European and from national perspectives, combining theory with policy and insights from practice: the interplay between private and public justice, the digitization of justice, and litigation funding. These current topics are viewed against the backdrop of the requirements of effective access to justice and the overall goal of establishing a sustainable civil justice system in Europe.  Read more...

The DynamInt Research Group at Humboldt University (located in the heart of Berlin, close to the Brandenburg Gate) invites international post-docs working in the field of European law (broadly understood) to apply for a research stay lasting between 3 and 6 months.

Applications are excepted on a rolling basis (no deadline). Successful candidates will receive a financial allowance and will be provided with a fully equipped working place. It is possible to teach classes while staying at Humboldt University. However, teaching is not mandatory.

On 29 August 2022, the European Union deposited its instrument of accession to the HCCH 2019 Judgments Convention, becoming the first Contracting Party to the Convention, and Ukraine deposited its instrument of ratification, becoming the second Contracting Party to the Convention. As a result, the Judgments Convention will enter into force on 1 September 2023 – just over four years after its adoption on 2 July 2019. More information is available here.

On 29 August 2022, Ukraine deposited its instrument of ratification of the HCCH 2007 Maintenance Obligations Protocol. The Protocol, which currently has 32 Contracting Parties, will enter into force for Ukraine on 1 December 2022. More information is available here.