Although it has in fact been out for several months now, there are few books more deserving of recognition on this blog than Étienne Farnoux’ impressive work on the substantive considerations that inform the rules on international jurisdiction. 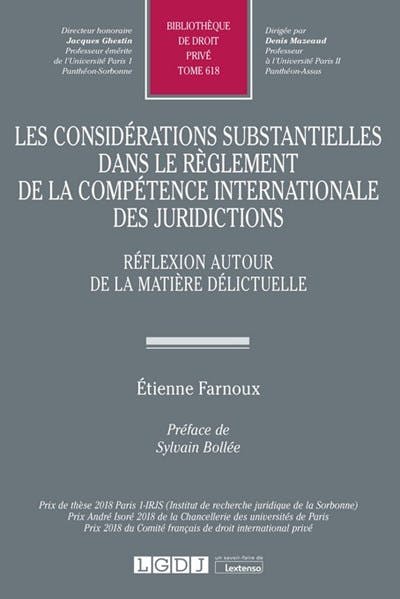 Across the book’s 700+ pages, Farnoux launches a sustained attack on the principe de proximité as the foundation of most rules on international jurisdiction, including, most importantly, the forum delicti. He does so in two steps (as any serious French scholar would do): He first discusses the insufficiencies of the proximity-based status quo before developing an alternative approach to international jurisdiction based on procedural and, more importantly, substantive (i.e. policy) considerations.

In the first part, Farnoux explains how localised connecting factors are regularly manipulated to achieve a certain result, most often to create a forum actoris, a practice particularly prevalent in the case law of the CJEU. His analysis is based on a wide range of judgments – Shevill, Kronhofer, Kolassa, Löber, eDate, Bolagsupplysningen, Wikingerhof, Gtflix Tv, … – but does not fail to acknowledge the occasional nuance, as reflected, i.a., by the recent decisions in Vereniging van Effectenbezitters and Mittelbayerischer Verlag. Farnoux deconstructs the alleged objectives of the the principe de proximité – ease of evidence, foreseeability, and effective administration of justice – and demonstrates their inability to justify the allocation of adjudicative jurisdiction in a growing number of inherently delocalised torts.

In the second part, Farnoux therefore proposes a complete change of perspective for international jurisdiction on torts. Rather than chasing an ever more elusive proximity, two sets of considerations should drive the search for the appropriate connecting factor: la justice procédurale, i.e. the just allocation of procedural advantages between claimant and defendant, and la justice substantielle, i.e. the substantive interests of both parties, and of the potential forum. Based on these considerations, Farnoux develops a set of two propositions: First, he suggests to replace the forum delicti by a forum victimae (or forum actoris contrôlé), which would vest jurisdiction in the domicile of the claimant provided that their claim passes a prima-facie exam of its substantive merit – a proposition that certainly holds a claim to intellectual honesty if compared to the practically similar status quo of the Brussels Ia regime, but comes with its own set of problems, including the challenge of examining the merits of a claim before jurisdiction has been established (admittedly a common exercise in English law, though). Alternatively, he proposes to create a new forum protectionis in tort for structurally weaker parties, a proposition that may have a wider appeal, not least for avoiding to abolish the principle of actor sequitur entirely. In the final part of the book, these proposals are supplemented by some thoughts on how the interests of the prospective fora also influence the rules on international jurisdiction.

All in all, Farnoux masterfully combines a thorough, yet very timely analysis of the existing rules on international jurisdiction for torts through the lens of the principe de proximité with some innovative, well-argued propositions on how the latter could be replaced. The book has deservedly won a series of prizes already and is all but certain to become a staple in the library of any scholar working on international jurisdiction.