by Aline Beltrame de Moura, Professor at the Federal University of Santa Catarina, in Brazil

On March 15th, 2021, at 5 pm (PT time – GMT 0), the Faculty of Law of the University of Lisbon will hold the conference “EU-Latin America trade and investment relations”. The conference is part of the Jean Monnet Network project “Building Rights and Developing Knowledge between European Union and Latin America – BRIDGE”.

Among the participants the Minister of State and Foreign Affairs of Portugal, the President of the European Parliament’s Delegation for relations with Brazil; the EU Ambassador to Brazil, the Undersecretary for Foreign Affairs of Mexico and a former Secretary of the Tribunal Permanente de Revisión del Mercosur.

A Workshop about the EU-Latin American trade and investment relations, will precede the conference (at 1 pm – PT time – GMT 0), with the presentation of the selected scientific papers from professors and researchers of nine different countries universities.

The Seminar will be held in Portuguese and Spanish, via zoom. For more information, click here. 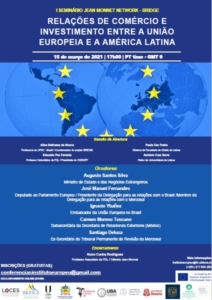