By Tobias Lutzi, University of Cologne

There should be few readers of this blog, and few conflict-of-laws experts in general, to whom Adrian Briggs will not be a household name. In fact, it might be impossible to find anyone working in the field who has not either read some of his academic writings (or Lord Goff’s seminal speech in The Spiliada [1986] UKHL 10, which directly credits them) or had the privilege of attending one of his classes in Oxford or one of the other places he has visited over the years. 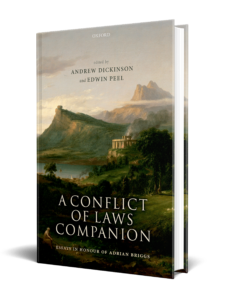 Adrian Briggs has taught Conflict of Laws in Oxford for more than 40 years, continuing the University’s great tradition in the field that started with Albert Venn Dicey at the end of the 19th century and had been upheld by Geoffrey Cheshire, John Morris, and Francis Reynolds* among others. His writings include four editions of The Conflict of Laws (one of the most read, and most readable, textbooks in the field), six editions of Civil Jurisdiction and Judgments and his magnus opus Private International Law in English Courts, a perfect snapshot of the law as it stood in 2014, shortly before the UK decided to turn back the clock. His scholarship has been cited by courts across the world. Still, Adrian Briggs has managed to maintain a busy barrister practice in London (including well-known cases such as Case C-68/93 Fiona Shevill, Rubin v Eurofinance [2012] UKSC 46, and The Alexandros T [2013] UKSC 70) while also remaining an active member of the academic community regularly contributing not only to parliamentary committees but also, on occasion, to the academic discussion on this blog.

To honour his impact on the field of Conflict of Laws, two of Adrian’s Oxford colleagues, Andrew Dickinson and Edwin Peel, have put together a book, aptly titled ‘A Conflict of Laws Companion’. It contains contributions from 19 scholars, including four members of the highest courts of their respective countries, virtually all of whom have been taught by (or together with) the honorand at Oxford. The book starts with a foreword by Lord Mance, followed by three short notes on Adrian Briggs as a Lecturer at Leeds University (where he only taught for about a year), as a scholar at Oxford, and as a fellow at St Edmund Hall. Afterwards, the authors of the longer academic contributions offer a number of particularly delightful ‘recollections’, describing Adrian Briggs, inter alia, as “the one time wunderkind and occasional enfant terrible of private international law” (Andrew Bell), “the perfect supervisor: unfailingly generous with his time and constructive with his criticism” (Andrew Scott), and “a tutor, colleague and friend” (Andrew Dickinson).

The academic essays that follow are conventionally organised into four categories: ‘Jurisdiction’, ‘Choice of Law’, ‘Recognition and Enforcement of Foreign Judgments’, and ‘Conflict of Laws within the Legal System’. They rise to the occasion on at least two accounts. First, they all use an aspect of Adrian Briggs’ academic oeuvre as their starting point. Second, they are of a quality and depths worthy of the honorand (possibly having profited from the prospect of needing to pass his critical eye). While they all are as insightful as inspiring, Ed Peel’s contribution on ‘How Private is Private International Law?’ can be recommended with particular enthusiasm as it picks up Adrian Briggs’ observation (made in several of his writings) that, so far as English law is concerned, “a very large amount of the law on jurisdiction, but also on choice of law, is dependent on the very private law notions of consent and obligation” and critically discusses it from the perspective of contract-law expert. Still, there is not one page of this book that does not make for a stimulating read. It is a great testament to one of the greatest minds in private international law, and a true Conflict of Laws companion to countless students, scholars, colleagues, and friends.

* corrected from an earlier version