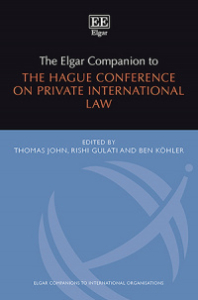 The Elgar Companion to the HCCH will be launched on 15 December 2020 as part of a 1 h long virtual seminar. The Companion, edited by Thomas John, Dr Rishi Gulati and Dr Ben Koehler, is a unique, unprecedented and comprehensive insight into the HCCH, compiling in one source accessible and thought-provoking contributions on the Organisation’s work. Written by some of the world’s leading private international lawyers, all of whom have directly or indirectly worked closely with the HCCH, the result is a collection of innovative and reflective contributions, which will inform shaping the future of this important global institution.

The Companion is timely: for more than 125 years, the HCCH has been the premier international organisation mandated to help achieve global consensus on the private international law rules regulating cross-border personal and commercial relationships. The organisation helps to develop dedicated multilateral legal instruments pertaining to personal, family and commercial legal situations that cross national borders and has been, and continues to be, a shining example of the tangible benefits effective and successful multilateralism can yield for people and businesses globally.

The Companion approaches private international law classically, that is, by understanding the subject matter with reference to its three dimensions: jurisdiction, applicable law, and the recognition and enforcement of foreign judgments. But, as the contributions in this work show, since its inception, and in particular since the 1980s, the HCCH has helped to reach international consensus concerning a further, a “fourth” dimension of private international law: cross-border legal cooperation.

In line with this development, and with the firm belief that such cooperation is crucial to the private international law of the 21st century, the Companion has adopted a strong focus on cross-border legal cooperation, including by an increased use of technology. This deliberate choice was fortuitous: the global pandemic is testing the domestic and international justice sector like never before, bringing into sharp focus the often non-existing or still arcane methods prevalent especially in the area of cross-border legal cooperation.

Structure of the Companion

The Companion comprises 35 Chapters that are organised into three Parts.

Part I of the Companion: Institutional perspectives

Part I consists of three Sections. Section 1 considers the HCCH as an international organisation and the contributions trace the development of the Organisation from its inception in 1893 until the present day, including its trajectory towards a truly global organisation. The initial Chapters specifically concern the history of the HCCH; its institutional setting, especially in terms of the HCCH’s privileges and immunities; as well as a contribution on the relationship between the HCCH, and the other two international organisations dealing with international private law issues, i.e., UNCITRAL and UNIDROIT, often also referred to as the HCCH’s ‘Sister Organisations’.

The following Section is dedicated to the HCCH as an organisation with global reach. The Chapters demonstrate how the HCCH is evolving from an organisation whose membership was historically European-based into an increasingly global institution. The HCCH currently has 86 Members (as of December 2020), comprising 85 States and the EU. Perhaps other Regional Economic Integration Organisations (REIO) may also become members one day, and this should be encouraged. Remarkably, since the turn of the century, the HCCH has added 39 New Members (or 45% of its current membership), including six South American States, two States from North America, one in Oceania, fourteen in Asia, eleven in Europe and five in Africa.[1] Since 3 December, the HCCH has a further Candidate State: Mongolia, which has applied for membership and for which the six-month voting period is now running. Importantly, this Section considers the HCCH’s expanded reach, including thoughtful contributions on the organisation’s work in Latin America and the Caribbean; Africa; and in the Asia Pacific. The Chapters also reflect on the work of the HCCH’s Regional Offices, namely, the Regional Office for Asia and the Pacific (ROAP), which is based in Hong Kong and commenced its work in 2012; as well as the Regional Office for Latin America and the Caribbean (ROLAC), operating out of Buenos Aires since 2005.

Part I’s final Section looks at the HCCH as a driver of private international law. The Chapters contain stimulating contributions concerning some of the contemporary philosophical dimensions of private international law as shaped by globalisation, and the ways in which the HCCH can be understood in this context; the role the Organisation can play in shaping private international law into the future; considering whether the 2015 Choice of Law Principles establish a good framework for regulatory competition in contract law; what role the HCCH can play in further strengthening legal cooperation across borders; and the concept of public order, including its relationship with mandatory law.

Part II of the Companion concerns contributions on existing HCCH instruments. It traces the evolution, implementation, and effectiveness of each of those instruments, and looks forward in terms of how improvements may be achieved. The contributors not only provide a record of the organisation’s successes and achievements, but also provide a critical analysis of the HCCH’s current work. They canvassed the traditional tripartite of private international law, including forum selection, choice of law and the recognition and enforcement of judgments. In addition, they also provided their thoughts on the fourth dimension of private international law, i.e. cross-border legal cooperation, tracing the pioneering, as well as championing, role of the HCCH in this regard, resulting in cooperation being a quintessential feature, in particular of more modern conventions, developed and adopted by the HCCH.

The second Section concerns HCCH instruments that are some of its major successes. But as the Chapters show, more work needs to be done given the ever-increasing cross-border movement of goods, services and people, and the need to better incorporate the use of technology in cross border legal cooperation. Contributions concern the 1961 Apostille Convention; the 1965 Service and 1970 Evidence Conventions; the 2005 Choice of Court Convention; and finally, the 2019 Judgments Convention which was decades in the making.

The final Section in Part II consists of contributions on HCCH commercial and finance instruments. Contributions specifically focus on the 1985 Trusts Convention; the 2006 Securities Convention; and the 2015 Choice of Law Principles, which constitute a soft law instrument demonstrating versatility in the kind of instruments HCCH has helped negotiate.

Part III of the Companion consists of Chapters that discuss the substantive development of private international law focusing on current and possible future priorities for the HCCH. In that regard, this Companion seeks to bridge the HCCH’s past and its future.

The first Section focuses on current priorities. It consists of contributions on a highly difficult and sensitive area of international family law, i.e. parentage and international surrogacy and how the HCCH may assist with its consensual solutions; how the HCCH may play a global governance role in the area of the protection of international tourists; and how the exercise of civil jurisdiction can be regulated. Specifically, this Chapter shows how the doctrine of forum non conveniens is increasingly being influenced by access to justice considerations, a matter borne out by comparative analysis.

The editors, who collaboratively prepared this entry, chose this structure for the Companion to provide the reader with an easy access to a complex organisation that does complex work. The structure also makes accessible the span of time the Companion bridges, chronicling the HCCH’s history, reaching back to 1893, while looking forward into its future.

The second entry on Conflict-of-Laws.net will outline the editor’s reflections on the 35 Chapters, drawing out some of the key themes that emerged from the Companion, including the HCCH’s contribution to access to justice and multilateralism.

[1] HCCH, ‘Members & Parties’ <https://www.hcch.net/en/states> accessed 6 December 2020. The latest Member State is Nicaragua for which the Statute of the HCCH entered into force on 21 October 2020.

The University of Zurich is seeking applications for a Professorship in private...Enforcing Consent-to-Jurisdiction Clauses in U.S. Courts
Scroll to top