The last issue of the Revue critique de droit international privé has been released. It is a special edition on the Cloud Act and the General Regulation on Data Protection.

The abstracts of the articles, authored by Marie-Elodie Ancel, Patrick Jacob, Régis Bismuth and Théodore Christakis, are available here.

Many thanks to Gustavo Cerqueira for this post:  Read more...

The last issue of the Revue Critique de Droit International Privé will shortly be released. This is a special edition composed of four articles on Brexit. It also contains several case notes, inter alia, a commentary by Horatia Muir Watt on Vedanta v Lungowe, major decision on the parent company’s duty of care and private international law, rendered by the Supreme Court of the United Kingdom on 10 April 2019 (see also here).  Read more...

“The princedom of Monaco has just given itself a brand-new legislation, a more or less complete codification of its private international law. In doing so, it joins the trend that has developed, particularly in Europe, since the latter part of the twentieth century and for which the model (under all meanings of the term) was the Swiss Act of 18th December 1987”.

The publisher provided the following summary:

“Providing a unique and clearly structured tool, this book presents an authoritative collection of carefully selected global case studies. Some of these are considered global due to their internationally relevant subject matter, whilst others demonstrate the blurring of traditional legal categories in an age of accelerated cross-border movement. The study of the selected cases in their political, cultural, social and economic contexts sheds light on the contemporary transformation of law through its encounter with conflicting forms of normativity and the multiplication of potential fora”.  Read more...

The Oral Rounds of the Pax Moot 2019 has been definitively set at May 24th and May 25th, the detailed schedule can be found on the website (www.paxmoot.com). As a further clarification, the deadline for registration has been extended to March 31st due to organizational requirements for some participating universities. However, we encourage teams to register as early as possible for the benefit of the competition.

We are also happy to announce that our partner JUDGTRUST have been very generous to provide financial assistance to 8 participating teams this year. This program will cover the travel and lodging costs, but teams will still have to pay 200 Euros per team of registration fees. All teams are eligible to apply for this program however the final decision is reserved for JUDGTRUST. For teams who wish to apply, please send an email indicating briefly your situation to info@paxmoot.com.  Read more...

PAX Moot is a specialized moot court competition focused on private international law issues. We foster a competition in which participants will be able to learn and apply first hand the complexities and nuances of this area of law. Instead of pleading primarily on the merits of the case, PAX Moot participants will be given a case geared towards jurisdictional and choice of law disputes. Instead of trying to win the whole case, clear goals will be given to each side as to which preliminary ruling they will be striving to achieve.  Read more...

The last issue of the “Revue critique de droit international privé” will shortly be released.

This is a special edition for the celebration of the fiftieth anniversary of the Brussels Convention of 1968, composed of fourteen articles from all over Europe.  Read more...

The Application of Foreign Law

In 2017, the French Cour de Cassation has promoted  a series of seven conferences on the application of foreign law, in partnership with the Société de législation comparée.

Theses conferences have just been published by the SLC.

Prefaced by Mr. Dominique Hascher, Judge at the Cour de cassation and President of the Société de législation comparée, the book contains the following contributions : 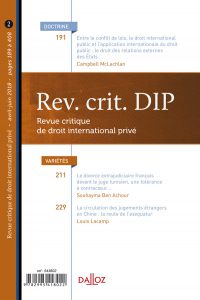