As part of LexisNexis Canada's new resource collection, Halsbury's Laws of Canada, Janet Walker of Osgoode Hall Law School has authored the volume on Conflict of Laws.  Professor Walker is the author of Castel & Walker, Canadian Conflict of Laws, 6th edition, from the same publisher, which is Canada's leading text in the field.  This new work features enhanced finding aids, a glossary of key terms, and listings of relevant secondary sources for further research.  More information available here from the publisher.

Three Croatian Articles on Conflict of Laws: Contracts and Companies

The 2006 special edition of the Collected Papers of Zagreb Law Faculty, which is dedicated to the 70th birthday of professor at the University of Zagreb Faculty of Law and member of the Croatian Academy of Arts and Sciences Jakša Barbi?, captures also the attention of the conflict lawyers, particularly due to three articles appearing there.

An article by professor emeritus Krešimir Sajko deals with the issues of contract conflict of laws de lege lata and de lege ferenda. The author compares the rules of the Rome Convention on the law applicable to international contractual obligation to the rules contained in the Proposal on the Rome I Regulation. Further comparison is made to the present Croatian rules in the field and the ones put forward by the group of Zagreb scholars. Professor Sajko concludes its paper by saying that, although there is no Croatian obligation to harmonize its conflict of law with the European rules, these rules should be adopted before Croatia becomes a Member State.  Read more...

Initial reports this morning suggested that the European Parliament Legal Affairs Committee (JURI) had adopted the second reading report (as amended) of the proposed “Rome II” Regulation on the law applicable to non-contractual obligations, and this has subsequently been confirmed on the MEP Rapporteur’s website. Diana Wallis states:

On Wednesday 20 December 2006, the Legal Affairs Committee adopted the second reading report, reinserting the Articles relating to defamation and road traffic accidents which had been excluded in the Council Common Position. The report will be adopted in plenary session on 18 January 2006.

The original draft second report of the European Parliament was produced on 8th November 2006 (see our news item on the substance of the report here), with the amendments to the draft report being published on 30th Novmber 2006.  Read more...

December 2006 has seen a wealth of activity in the U.S. federal courts on topics of particular interest to private international practitioners. This month’s U.S. round-up will divide the pertinent and most interesting cases into four primary subject-matter areas: (1) Choice of law; (2) Personal Jurisdiction; (3) International Discovery; and (4) Foreign Sovereign Immunity. Part I here will focus only on the first two issues, with Part II to follow within the next few days.

This is a final reminder that the deadline for submission of an abstract of a proposed paper, to present at the Journal of Private International Law Conference 2007, is 20th December 2006, at 6pm.

Update: the deadline has now passed. Many thanks for all the submissions.

Vacancies for speaking at the conference cannot be guaranteed after the deadline, so we would urge all those who wish to present a paper to submit their abstract by 6pm on 20th December 2006. The abstract should be between 200-300 words.

You can find details on submitting the abstract of your proposed paper here.

German Article on Consumer Contracts in Rome I

An article by Giesela Rühl (Hamburg) on the provision concerning consumer contracts in the Rome I proposal has been published in the European Community Private Law Review (GPR) 2006, 196 et seq. The English summary reads as follows:

In December 2005 the European Commission has released the Proposal for a Regulation on the law applicable to contractual obligations. One of the most important changes relates to the scope of application of Article 5, which is characterized by the introduction of the targeted activity criterion embodied in Article 15 (1) lit. c) of the Brussels I Regulation and a safeguard clause for the protection of professionals. At first blush this combination – that is new to European private international law – seems to make sense. However, a closer examination reveals that the safeguard clause does not have an independent scope of application if it is combined with the targeted activity criterion. Since it merely complicates the provision of Article 5 (2) it should be deleted. 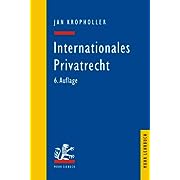 The 6th edition of the German standard work on private international law, "Internationales Privatrecht" by Jan Kropholler (Hamburg), has been published.

The main part of the book is dedicated to choice of law. Here Kropholler describes in a first chapter the basic ideas of the conflict of laws, such as its history, the structure of choice of law rules, basic concepts as qualification, connecting factor and public policy before attending in the second chapter to the individual fields of private international law such as legal transactions, family law, the law of contract, non-contractual obligations, the law of property and company law. In the last chapter, Kropholler addresses the fundamentals of international civil procedure law. While Kropholler focuses on German national rules he includes also international conventions as well as European legal instruments.

An annotation to Opinion 1/03, where the European Court of Justice has held that "the conclusion of the new Lugano Convention on jurisdiction and the recognition and enforcement of judgments in civil and commercial matters (…) falls entirely within the sphere of exclusive competence of the European Community", by Ulrich G. Schroeter (Freiburg) has been published in the European Community Private Law Review (GPR) 2006, 203 et seq. The English summary reads as follows:  Read more...

Piper Aircraft Co. v. Reyno is the Supreme Court’s leading case on forum non conveniens – that is, on when a federal court should dismiss a pending case in favor of litigation in a foreign forum. Every casebook features the case and every civil procedure professor has taught it. The greatest value of Piper, however, is not its discussion of forum non conveniens, but its fact pattern, which provides an unparalleled vehicle for reviewing a startling number of doctrines pertaining to domestic forum selection, including personal jurisdiction under the stream-of-commerce theory, subject matter jurisdiction based upon diversity of citizenship and alienage, venue, transfer of venue, choice-of-law, as well as statutory interpretation. In addition, its treatment of forum non conveniens raises profound questions about the role of American courts in global perspective. Piper thus accomplishes more than any other single case in the civil procedure course, while emphasizing the importance of forum selection; where litigation proceeds is an issue of surpassing importance, on which litigants will expend great resources.  Read more...

No Surprise But Now Substantiated: Foreign Litigants Lose More in US Courts

As recently covered by the Financial Times, and forthcoming in the Journal of Law and Economics, a new study details an unsurprising yet still unsettling fact when it is substantiated: foreign litigants lose more in U.S. Courts.  Here is the abstract:

Using a comprehensive sample of 2,361 public U.S. corporate defendants and 715 public foreign corporate defendants in U.S. federal courts in the period 1995-2000, we find that the market reaction at the announcement of a U.S. federal lawsuit is less negative for U.S. corporate defendants. We find that this market reaction is rational; U.S. firms are less likely to lose than foreign firms controlling for year, industry, type of litigation, size and profitability. This may still reflect a sample selection bias. We control for this bias, and the results remain. We thus cannot rule out that U.S. firms have a home court advantage in U.S. federal courts.  Read more...