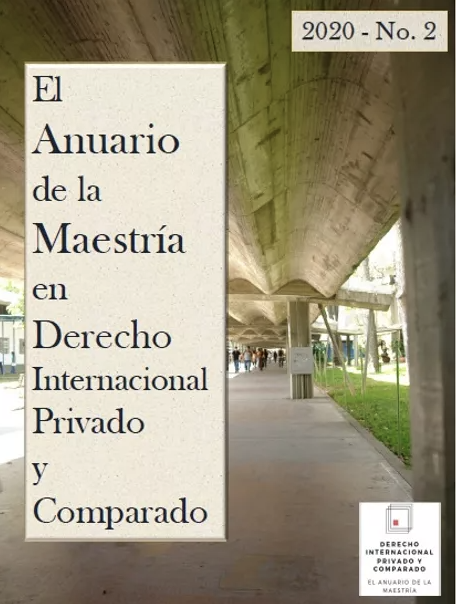 Amazingly, despite the severe crisis in Venezuela, the Master’s Program in Private International Law and Comparative Private Law at the Universidad Central de Venezuela has managed to publish its second Yearbook, with two theses and several impressive shorter pieces by students as well as two new pieces and two “classics” by professors.  (Report on the first yearbook last year is here.)

Before the two years of the transition regime that the OAS Charter provides for cases of retirement from the Organization (art. 143), on 8 February 2019, Juan Guaidó, president of the National Assembly and interim president of the Republic, wrote to the OAS to “reiterate and formally express the decision of the Venezuelan State to annul the supposed denunciation of the OAS Charter, for Venezuela to be able to remain a member state of the Organization.”

In its session of 9 April 2019, the OAS Permanent Council accepted the representation appointed by the National Assembly of Venezuela. However, on 27 April of the same year, the Foreign Ministry, representing Nicolás Maduro, issued a statement informing that “With the denunciation of the OAS Charter made by the government of the Bolivarian Republic of Venezuela on 27 April 2017, within the framework of what is contemplated in article 143; as of this date, no instrument signed and / or issued by the OAS will have a political or legal effect on the Venezuelan State and its institutions”.

This political situation has impacted the practical application of the Inter-American Conventions issued by the Specialized Conferences on Private International Law (CIDIP, by its acronym in Spanish). Remember that within the framework of CIDIP, Venezuela has ratified fourteen instruments on bills of exchange, promissory notes and bills, international commercial arbitration, letters rogatory, taking of evidence abroad, powers of attorney to be used abroad, checks, commercial companies, extraterritorial enforcement of foreign judgments and arbitral awards, information on foreign law, general rules, international child abduction, and international contracts.

For Venezuela these conventions entered into force once the requirements for their validity established in the Constitution and the Vienna Convention on the Law of Treaties had been met. The rules of this convention are considered customary, since Venezuela has not ratified this instrument.

We must consider that the Inter-American Conventions are open conventions, which allow the accession of States not party to the OAS. Spain, for example, has accessed to conventions on letters rogatory and on information on foreign law.

Besides that, none of the Conventions has been denounced or incurred in causes of nullity or suspension, nor has there been an impossibility for performance, nor has therebeen a fundamental change in the circumstances, in the terms of articles 53, 57, 58, 60, 61, 62 of the Vienna Convention.

Although Venezuela has broken diplomatic relations with some States parties of the OAS, such relations are not indispensable for the application of Inter-American Conventions, even though in some cases cooperation is regulated through central authorities.

Another important issue is the independence of the Inter-American Conventions. Since the OAS is not an integration system, its treaties must pass the approval and ratification or accession process, because they are not covered by the characteristics of supranationality or its equivalent, such as occurs in the Andean Community or the European Union.

In any case, the situation is not clear. Article 143 of the OAS Charter provides that when “the General Secretariat receives a notice of denunciation, the present Charter shall cease to be in force with respect to the denouncing State, which shall cease to belong to the Organization after it has fulfilled the obligations arising from the present Charter”. There is no reference to the treaties approved within it.

Unfortunately, this situation has been reflected in the decisions of our courts. So far there have been two decisions of the highest court in which the Inter-American codification is set aside. In both, exequatur decisions, the Inter-American Convention on Extraterritorial Validity of Foreign Judgments and Arbitral Awards was not applied.

The Civil Chamber of the Supreme Court of Justice issued the first one, under number 0187 on 30 May 2019 (see also here). This decided the exequatur of an Ecuadorian divorce judgment and stated:

In this case, the Chamber bases its decision on the fact that in the preamble of the Inter-American Convention, the States parties to the OAS are indicated as participants and that the deposit of the instrument of ratification was made before the OAS. It should be noted that neither this nor any other Inter-American Convention has been denounced by Venezuela.

In the second decision, issued by the Social Chamber of the Supreme Court under number 0416, on 5 December 2019 (see also here) on the occasion of the exequatur of a Mexican divorce judgment, there is not even an argument as to why not apply the Inter-American Convention. In it, the Social Chamber only asserted:

“In this case, it is requested that a judgment issued by a court in the United Mexican States, a country with which the Bolivarian Republic of Venezuela has not signed international treaties on the recognition and enforcement of judgments, be declared enforceable in the Bolivarian Republic of Venezuela through the exequatur procedure; for this reason, and following the priority order of the sources in the matter, the rules of Venezuelan Private International Law must be applied”.

The fundamental role of Venezuela in Inter-American codification through the work of Gonzalo Parra-Aranguren and Tatiana B. de Maekelt is not a secret to anyone. It is unfortunate that a political decision attempts to weaken the Venezuelan system of Private International Law. We insist that ignoring the Inter-American Conventions not only constitutes a breach of the obligation of the State to comply with existing treaties, but also of the internal rules that, like article 1 of the Venezuelan Private International Law Act, require the preferential application of the Public International Law rules, in particular those established in international treaties.