Against the backdrop of Brexit, an initiative has been launched to strengthen Frankfurt as a hot spot for commercial litigation in the European Judicial Area. On March 30, 2017, the Minister of Justice of the Federal State Hessen, Ms Kühne-Hörmann, organized a conference at which the Justice Initiative was presented. More  than 120 stakeholders (lawyers, judges, businesses) attended the conference. The original paper was elaborated by Professors Burkhard Hess (Luxembourg), Thomas Pfeiffer (Heidelberg), Christian Duve (Heidelberg) and Roman Poseck (President of the Frankfurt Court of Appeal). Here, we are pleased to provide an English translation of the position paper with some additional information on German procedural law for an international audience. The proposal has, as a matter of principle, been endorsed by the Minister of Justice. Its proposals are now being discussed and shall be implemented in the next months to come. The paper reads as follows: END_OF_DOCUMENT_TOKEN_TO_BE_REPLACED  Read more...

The new division, which is in fact the 3rd division of the court (3ème Chambre), is to be staffed with nine judges who speak foreign languages, and will therefore be able to assess evidence written in a foreign language. For now, the languages will be English, German and Spanish, as one juge speaking Spanish and two speaking German are currently on the court.

In an interview to the Fondation de droit continental (Civil law initiative), the President of the Court explained that the point was to make French justice more competitive and attract international cases. It also made clear that France was following Germany’s lead, where several international divisions were established in 2009 in Hamburg and Cologne.

It should be pointed out to readers unfamiliar with the French legal system that French commercial courts are not staffed with professional judges, but with members of the business community working part-time at the court (and for free). In Paris, however, many of these judges work in the legal department of their company, and are thus fine lawyers.

Also, French commercial courts (and French civil courts generally) virtually never hear witnesses, so the issue of the language in which they may address the court does not arise.

So, the new international division will be able to read documents in several foreign languages. However, nothing suggests that parties or lawyers will be able either to speak, or to write pleadings, in any other language than French. Lawyers arguing these cases will still need to file their pleadings in French, and thus to translate them in English beforehand for their clients. Furthermore, the interview of the Court’s President seems to suggest that using a foreign language will not be a right for the parties. Quite to the contrary, it seems that it will not be possible if one of the parties disagrees, and demands documents be translated in French.

Will that be enough to attract additional commercial cases to Paris?

I wonder whether introducing class actions in French civil procedure would have been more efficient in this respect.

For the full interview of the Court’s President, see after the jump.

This event is supported by the Erasmus+ Programme of the European Union and organised as part of the Jean Monnet Module project “Harmonisation of the Principles of Insurance Law in Europe” (HOPINEU) run at Koç University. 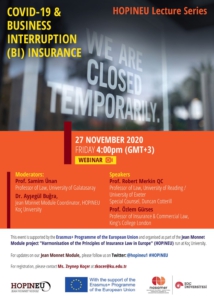 This book gives an overview of recent developments in Turkish family law for legal practitioners in Europe. Both the private international law and the substantive law aspects of Turkish family law is explained, with a special focus on the recognition and enforcement of foreign divorce decisions, the role of fault in divorce proceedings, the dissolution of the matrimonial regime of participation in the acquisition, the surname of women and children and joint custody after divorce. It contains up-to-date information based on recent amendments in legislation and recent case law of the Court of Cassation and the Constitutional Court.  Read more...

You are kindly invited for the conference on “Towards a global cooperation framework for temporary and circular migration” by Hans van Loon (Former Secretary General of the Hague Conference on Private International Law) on November 18, 2020, Wednesday between 12.30-13.30 (GMT+3). The conference is organised by Bilkent University as a part of the Talks on Migration Series within the Jean Monnet Module on European and International Migration Law. It will be held via zoom, free of charge.