On December 21, 2017, the Japanese Supreme Court rendered a decision on the Hague Abduction Convention.  The Court upheld a lower court decision in favor of the Japanese mother, even though she  had turned back on her promise to return the kids from a visit to Japan, and even though that same court had earlier issued a return order in favor of the American father. The matter had received international press attention, and even a Congressional subcommittee hearing.

Japan had long refused to join the Hague Convention, and when it did, in 2014, critical observers already expected that courts would find ways to undermine it. Those observers see themselves vindicated.

Colin Jones reports critically on the decision; he has previously written on Japan’s joining the Convention and on reluctance to enforce it. Useful background from the Law Library of Congress is here.

Japanese accession to the Convention has been a frequent scholarly topic, both in Japan and elsewhere. Yuko Nishitani, who had already written about “International Child Abduction in Japan” in (2006) 8 Yearbook of  Private International Law 125-143, and who wrote a long report (in Japanese) for the Japanese Ministry in 2010, provided a brief  analysis in 2011.  Dai Yokomizo discussed the accession in (2012) Revue critique 799; Jun Yokohama did so in the Mélanges van Loon (2013, pp 661-72).  Vol. 57 (2014) of the Japanese Yearbook of International Law contains articles by Tatsuki Nishioka and Takako Tsujisaka, Masayuki Tanamura, Masako Murakami, Martina Erb-Klünemann, and Nigel Vaughan Lowe.  Takeshi Hamano helpfully explains the Japanese reluctance with regard to the Japanese ideology of the family. Outside of Japanese authors, Barbara Stark and Paul Hanley wrote most recently in the United States; the topic is also addressed in several student  notes. The accession was also discussed by Bengt Schwemann (in German) and Francisco Barberán Pelegrín (in Spanish).

Shortly before Christmas the UKSC released its decision on jurisdiction in Brownlie v Four Seasons Holdings Incorporated (available here). Almost all the legal analysis is obiter dicta because, on the facts, it emerges that no claim against the British Columbia-based holding corporation could succeed (para 15) and the appeal is allowed on that basis. I suppose there is a back story as to why it took a trip to the UKSC and an extraordinary step by that court (para 14) for the defendant to make those facts clear, but I don’t know what it is. On the facts there are other potential defendants to the plaintiffs’ claim and time will tell whether jurisdictional issues arise for them.

The discussion of the value of the place of making a contract for jurisdiction purposes is noteworthy. In para 16 two of the judges (Sumption, Hughes) are critical of using the traditional common law rules on where a contract is made for purposes of taking jurisdiction. This has been the subject of debate in some recent Canadian decisions, notably the difference in approach between the Court of Appeal for Ontario and the Supreme Court of Canada in Lapointe Rosenstein Marchand Melançon LLP v Cassels Brock & Blackwell LLP, 2016 SCC 30 (available here). The SCC was fine with using the traditional rules for this purpose. In Brownlie, I do not think it is clear as to what view the other three judges take on this point.  Read more... 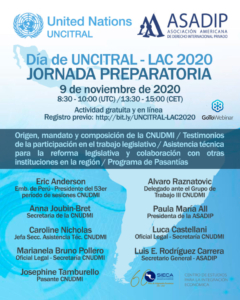 The programme of the XLIII Seminar of the Mexican Academy of Private International and Comparative Law (AMEDIP) is now available here. As previously announced, the XLIII Seminar will take place on 19-20 November 2020 for the first time online. 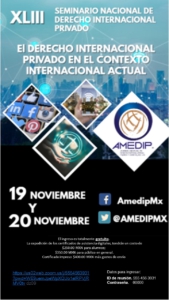 The meeting will be held via Zoom.

It will also be transmitted live via AMEDIP’s Facebook page.

Participation is free of charge. The language of the seminar will be Spanish.  Read more...

Please note that you are welcome to attend as much or as little of the workshop as you are able.

10.00-10.30 The Opportunities of Brexit for the development of Private International Law in the Commonwealth  Read more...