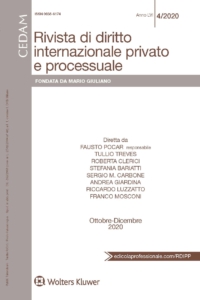 The fourth issue of 2021 of the Rivista di diritto internazionale privato e processuale (RDIPP, published by CEDAM) was just released. It features:

This paper addresses the recognition of the status of the child when a same-sex couple accesses techniques of assisted reproduction abroad. According to recent European and Italian Constitutional case law, a form of legal recognition in favor of both partners is due when at least one of them is genetically linked to the child, on account of the duty to grant the child’s identity within a family. The need and the legal form of recognition has to be assessed in the light of the interests of the child, which should prevail over national rules limiting the use of medically assisted reproduction.

Luigi Fumagalli, Professor at the University of Milan, Problemi vecchi e nuovi nella cooperazione per l’assunzione delle prove all’estero in materia civile: la rifusione della disciplina nell’Unione europea (Old and New Problems in the Cooperation for the Taking of Evidence Abroad in Civil Matters: The Recasting of the EU Regime) [in Italian]

The analysis of Regulation (EU) 2020/1783 of 25 November 2020 provides an opportunity to review the overall regulatory framework of cooperation in the taking of evidence applicable in the relations between the Member States of the European Union, to underline the elements of novelty or to detect the critical issues that still exist. It shows that the mechanisms envisaged appear to be suitable for achieving the objectives which the uniform framework sets itself: they oblige the authorities of the Member States to cooperate, almost without exception; the instruments by which this is achieved are shown to be capable of allowing, in reasonably short terms and without excessive formalism, the taking, in a manner which is absolutely tolerable for the Member State in which it is carried out, of evidence that can be used in the proceedings for which it is required. The main novelty profile consists in the wide space left to the use of communication technologies for the implementation of judicial assistance mechanisms: they mark the distance with respect to the oldest communication tools and touch each “segment” of the overall activity through which evidence is taken in a State other than that of the trial. However, the framework defined by Regulation 2020/1783 continues to suffer from certain limitations. In the first place, one cannot fail to highlight a series of formal (relating to the Italian version of the text) or conceptual inaccuracies. Alongside this, it should be noted the strong constraints that derive, for the implementation of the assistance procedures brought by the Regulation, from domestic procedural law, which the European legislation has not modified (nor has it intended to modify). Within these limits, the rules laid down appear, however, to take into account the complexity of the procedural mechanisms involved in the implementation of international judicial assistance procedures, and mark a step forward in the integration between the systems, laying the foundations for further developments.

Alberto Malatesta, Professor at the University “Cattaneo LIUC” in Castellanza, Circolazione delle sentenze tra Unione europea e Regno Unito: a favore di una cooperazione in seno alla Conferenza dell’Aja (Circulation of Judgments between the European Union and the United Kingdom: In Support of a Cooperation in the Framework of the Hague Conference) [in Italian]

This essay outlines the various options for a future cooperation between the EU and the UK in the field of recognition and enforcement of judgments in civil and commercial matters. After examining some alternatives, it focuses especially on the 2007 Lugano Convention, which appears to be a good tool for this purpose. However, pursuant to Art. 72(3) of the Convention itself, the EU has recently objected to the UK’s application of accession. The Author explains the reasons why the EU’s position is appropriate from the point of view of the Member States’ interests and upholds the Hague Conference of Private International Law as the best venue where cooperation between the EU and the UK can be strengthened.

This article analyses a decree issued by the Court of Appeal of Bari rejecting the complaint of an Albanian citizen against a previous decree of the Family Tribunal of Bari. The Tribunal had ordered the forfeiture of the woman from parental responsibility towards her young child (an Albanian citizen, as well) and other measures for the protection of the child. The cross-border features of the case have provided the opportunity for highlighting the different regulatory sources likely to be applied in the field of protection of foreign children such as Regulation (EC) No 2201/2003, the 1996 Hague Convention on the protection of children and the Italian rules on jurisdiction and applicable law, and to verify whether the relevant rules relating to both jurisdiction and applicable law have been correctly applied. In this regard, the decree of the Court of Appeal is substantially compliant with the best interests of the child, but raises some perplexities for the failure to ascertain the habitual residence of the child and consequently for having applied the internal rule on tacit acceptance of jurisdiction rather than Article 8 of Regulation No 2201/2003. Another unclear aspect of the Court’s ruling is that it did not specify on the basis of which conflict-of-law rule Italian law was applied.

In addition to the foregoing, in this issue Fausto Pocar, Professor Emeritus at the University of Milan, penned a moving tribute in memoriam of Professor Alegría Borrás.