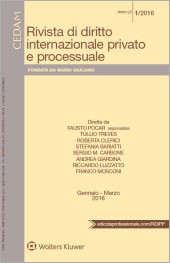 The second issue of 2022 of the Rivista di diritto internazionale privato e processuale (RDIPP, published by CEDAM) was just released. It features:

Domestic violence has drawn increasing attention both from the lawmaker and legal scholars. Legal means to prevent domestic violence and protect women have been promoted and implemented at the national and supranational levels. This article concentrates on seeking and enforcing civil protection measures in cross-border family conflicts. Protective measures are often sought and taken in the State where the prospective victim (and often also the tortfeasor) is habitually resident. PIL issues are however rarely addressed. Regulation (EU) No 606/2013 on mutual recognition of protection measures in civil matters provides a useful instrument when the need for recognition and enforcement in a different Member State arises at a later stage. Less dealt with is the issue of selecting an appropriate ground for jurisdiction, which is not governed by the mentioned Regulation. The latter issue becomes especially relevant in the very peculiar case of protection measures to be issued in the so-called State of refuge when a mother challenges a situation of domestic violence as a ground for leaving the State of a child’s habitual residence and searches for protection elsewhere. The interplay between domestic violence and abduction cases, a situation quite frequent in practice but rarely addressed in legal literature, is further explored and dealt with.

Ilaria Viarengo, Professor at the University Milan, The Coordination of Jurisdiction and Applicable Law in Proceedings Related to Economic Aspects of Family Law

This article addresses the complex features and problems arising from the combined application of all European and international instruments dealing with divorce and the economic aspects of family law. The need to avoid litigation proceedings in different jurisdictions, entailing the duplication of proceedings and costs and the need to have divorce and all the financial aspects governed by the same law are of central importance from a practical point of view. This article provides an analysis of whether and to what extent these two needs can be satisfied with the combined application of the EU family law regulations at issue. Firstly, it deals with some general issues whose solution could have an impact on the coordination among all these instruments. Consequently, it examines the interplay among rules on jurisdiction and applicable law, including the role of party autonomy in pursuing coordination.

This article deals with the concept of habitual residence, which is in widespread use in the EU Regulations in the field of family law. Firstly, the article gives an overview of these Regulations, and then it analyses the case-law of the CJEU on the criterion of habitual residence referred to children, deceased persons, and spouses. The contribution examines two fundamental elements of the concept of habitual residence identified both by CJEU and scholars: the objective element, i.e. a sufficiently stable presence of a person in a Member State, and the subjective element, i.e. the intention of the person concerned to establish the permanent or habitual centre of his or her interests in that place. The article also tries to identify the most suitable method of interpretation of the concept of habitual residence and, in particular, it investigates which approach is more desirable between a uniform approach (which fosters a uniform definition of habitual residence in EU law) and a functional one (which implies an interpretation that takes into account the aim of the disposition in which the concept is used). Ultimately, the Author endorses the solution adopted by the CJEU in the IB case, which combines the aforementioned approaches.

A reform seeking to speed up the functioning of the EAPO information mechanism...Out now: Hannah Buxbaum/Thibaut Fleury Graff, Extraterritoriality / L’ext...
Scroll to top