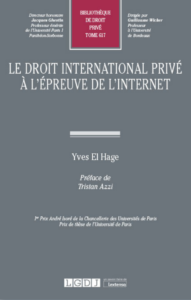 With his thesis, which has just been published by LGDJ as part of the prestigious Bibliothèque de droit privé, Yves El Hage makes another, yet formidable addition to the ever-growing body of scholarship on the difficult relationship between private international law and the internet. In the inimitable style of French scholarship, the book consists of two main parts addressing, in turn, “the confrontation” and “the reconciliation” between private international law and the internet (with each part of course being further divided into two sections, and so on).

In the first part, the author convincingly identifies the two core challenges of the internet, i.e. its immateriality (or virtuality) and its universality (or ubiquity). For each of these, he shows how courts and legislators have struggled to find appropriate responses on the basis of traditional PIL rules and methods, with the “territorialist” response to the inherently international nature of online communication a particularly pertinent point of criticism.

In the second part, El Hage discusses two possible ways in which PIL might accommodate these challenges (both of which aim to identify a single competent jurisdiction and a single applicable law). First, he rejects proposals (including my own) that rely mainly, if not solely, on the places in which the individual parties to a litigation have initiated and/or received acts of online communication (so-called “personal” connecting factors). According to him, such criteria do not resolve the existing problems of localisation and fail to accommodate the relevant regulatory interests beyond a purely economic and/or protective logic. Instead, the author proposes, second, to maintain the existing “extrapersonal” connecting factors but to reinterpret them in a way that puts the place of the most significant impact (“l’impact le plus significatif de l’activité en ligne”) into the centre of the analysis.

The extent to which this proposition would differ in practice from proposals relying on “personal” connecting factors, especially from those that try to combine actor- and victim-centred criteria, can certainly be debated. Regardless, the book by Yves El Hage offers both an unusually rich account of the existing (general and specialised) scholarship and a well-argued proposition that flows seamlessly from his thorough analysis of the status quo.