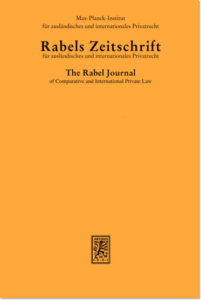 The fourth issue of RabelsZ 2022 has just been released. It contains the following articles:

Conflict of Corporate Laws and International Investment Law. – The withdrawal of the United Kingdom from the EU has revived the debate on the conflict of corporate laws. Much attention has recently been given to the new generation of EU free trade agreements, such as the EU-UK Trade and Cooperation Agreement, but their impact on conflicts in the field of corporate law remains unclear. This article proposes that the conflict-of-law effects of these agreements can be fully understood only in the light of their common background in international investment law. Building upon an analysis of the role of treaties in Germany’s conflict-of-law system and of the multiple intersections between the conflict of corporate laws and international investment law in general, the article demonstrates that the newest EU free trade agreements imply in particular the application of a restricted conflict-of-law theory of incorporation on foreign corporations originating from the respective signatory states. While the agreements’ effects on conflicts in the corporate law arena are not as far reaching as those of the EU’s freedom of establishment, they nevertheless further narrow the remaining scope of application of the traditional seat theory underlying Germany’s autonomous rules on conflicts vis-à-vis corporate law.

Brussels I bis extendenda est? On the Future of the International Jurisdiction of German Courts in Civil and Commercial Matters after an Extension of the Regulation. – With the expiry of the deadline of art. 79 Brussels I bis, the academic debate on a possible further extension of the Regulation to situations involving non-EU defendants is (again) gaining momentum. The present study aims to contribute to this discussion. It compares the relevant German rules on international jurisdiction over non-EU defendants with those of the Brussels I bis Regulation in order to be able to assess the consequences of a possible extension from a German perspective. The study reveals that even replacing the national rules in their entirety would not amount to a radical change. In particular, the addition of typified places of performance under art. 7 no. 1 lit. b Brussels I bis to the forum contractus and the availability of a common forum for joint defendants under art. 8 no. 1 Brussels I bis would constitute welcome improvements of the current framework. The loss of jurisdiction based on the presence of assets under § 23 ZPO would arguably be a disadvantage if not properly compensated for, e.g. through a forum necessitatis provision. The biggest advantage, though, would most likely be the harmonization of the law of international jurisdiction across the EU – which, from a German perspective, would come at a rather reasonable price.

Virtual Participation in Court Proceedings from Abroad and Its Effects on the Sovereignty of the Foreign State of Residence – With Consideration of the Relationship Between Public International Law and the Conflict of Laws. – Most German-speaking scholars and some German courts consider participation in virtual court proceedings from a foreign state of residence to be a violation of foreign sovereignty. This essay stakes out a contrary position. In reaching this conclusion, it focuses on the distinction between the exercise of state power abroad and the exercise of state power regarding foreign facts. Especially with regards to extraterritorial legislation, it is argued that the law’s scope of sovereign validity remains territorial even if its scope of application covers facts abroad. The discussion also shows how this distinction is equally applicable to court judgments that concern foreign elements. Furthermore, the article discusses the nature of public international law principles regarding extraterritorial legislation and their relationship to national conflict of laws provisions. Also considered is how the sovereignty principle ought to be understood in cyberspace. Having established this theoretical foundation, it is concluded that regardless of the procedural role of the respective party, participation in virtual court proceedings from a foreign state of residence does not amount to a violation of foreign sovereignty.

This article is a reaction to the growing economic significance of the living human body as well as its legal status. In this paper, we argue that ownership in the human body most effectively guarantees the autonomy of the human will as to the use and disposal of one’s own body, but classical ownership theory is unable to fully ensure the autonomy of the human will, since it risks reviving the institution of slavery. We will demonstrate that theories establishing rights to the body other than ownership rights are limited in content and are inherently inconsistent. At the end of the article, we will propose an abstract ownership theory that allows for the exercise of maximum freedom to dispose of the human body while one is alive and which will be devoid of the flaws of the preceding theories.

Call for abstracts for works in progress (WIP) conference and student writing...What is an international contract within the meaning of Article 3(3) Rome I?...
Scroll to top