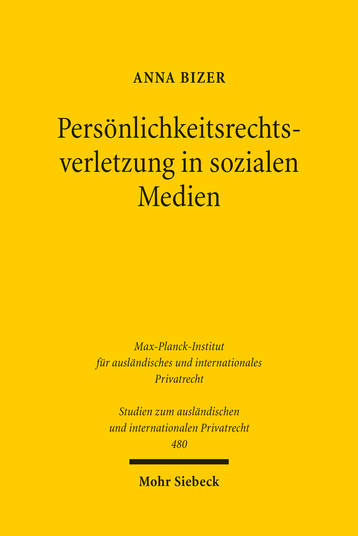 Based on a tweet by the ‘enfant terrible of tech’, Elon Musk, Michael Douglas recently discussed ‘Conflict of Laws of Freedom of Speech on Elon Musk’s Twitter’ on this blog. In a new volume published by Mohr Siebeck, Anna Bizer adresses similar questions, from the point of view of German and European PIL. Starting from the observation that social media challenges the existing legal framework (even more so than the internet itself) by incentivizing the sharing of, and interaction with content, and thus perpetuating violations of personality rights, even where the original author of a post has already deleted it, the author focuses on three areas of law: contract law, tort law, and data protection.

As far as questions of contract law are concerned, Bizer rightly puts an emphasis on the fact that social media platforms often involve a triangle (or pyramid) of contractual relationships between the hosts and at least two users. Regarding the relationship between the host and individual users, she identifies the delineation between private and professional use (only one of which triggers the consumer rules in the Brussels Ia and Rome I Regulations) as the main problem and argues in favour of a much wider understanding of the consumer definition. Regarding the relationship between multiple users of the same service, she rightly acknowledges the potential of the platform contract to influence the applicable law via Art. 4(3) Rome I.

Concerning tort law, Bizer is generally critical of the existing legal framework under Art. 40–42 of the German EGBGB (infringements of personality rights being excluded from the Rome II Regulation). Instead of giving the claimant a choice between Handlungsort (place of acting) and Erfolgsort (place of damage), potentially leading to a mosaic of applicable laws, the applicable law should be determined by identifying the objective centre of the violation, with the intended readership of a given publication as the guiding criterion, which may be supplemented, if necessary, by the CJEU’s centre-of-interests criterion and the place of acting. Again, the author acknowledges that the contract for the social media platform might be taken into account via an escape clause (i.e. Art. 41 EGBGB).

In addition to questions of data protection, the author also addresses the role of the e-Commerce Directive’s country-of-origin rule and the ordre public in what is a well-argued, excellently researched book on a highly topical question.

Conflicting Views on the Restatement (Third) of Conflict of Laws AMEDIP’s upcoming seminar: The impact of artificial intelligence on Private...
Scroll to top