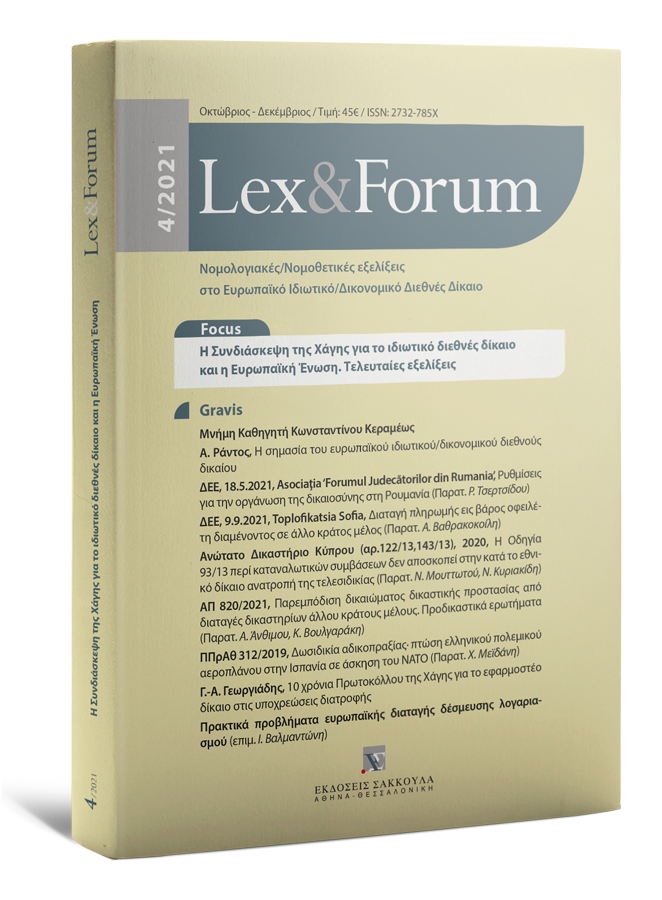 Professor Kerameus started his academic career at the Law School of the Aristotle University of Thessaloniki, in his home town, and completed his career at the University of Athens. He taught Civil Procedure, Comparative and International Procedural Law in Greek and other leading Universities abroad.

He was awarded Honorary Doctor of Laws by the Universities of Hamburg (1993), Paris II Pantheon-Assas (2000), Liege (2003) and Vienna (2003). He was the President of the International Academy of Comparative Law (1998-2006), Director of the Hellenic Institute of International and Foreign Law (1990-2007), member of the European Academy (since 1994), the International Union of Legal Science (since 1993) and the International Union of Procedural Law (since 1995)y. He represented Greece in the conference on the Lugano Convention, in the negotiations for the accession of Greece to the Brussels Convention, as well as in various committees for the harmonization of the law of contracts, torts and civil procedure in the EU.

His Report, co-authored with Dimitrios Evrigenis, on the accession of Greece in the Brussels Convention (OJ C-298/24-11-1986) has always been a leading guide in the field of European procedural law. The breadth of his interests also covered the work of the Hague Conference. In this context, he gave lectures on the topic of ‘Enforcement in the International Context’– Collected Courses of the Hague Academy of International Law (Volume 264), 1997.

The 2019 Hague Convention on the Recognition of Foreign Judgments will make it possible for foreign, non-EU, decisions to be recognized under common terms in EU jurisdictions, and vice versa. The presentation of these developments is the main subject of the present issue (Focus).

The introduction (Praefatio) was conducted by the Greek Attorney General to the ECJ, Honorary President of the Council of State, Mr. Athanasios Rantos. The main topic of the issue was the subject of an online conference (3.12.2021), with the participation of experienced professionals on the topic in our country,and of leading foreign scientists, who participated in the works of the 2019 Hague Convention.

The general introduction was assigned to the Director of the Directorate-General for Justice of the European Commission, Dr. Andreas Stein, who participated in the works of the 2019 Convention as the head of the EU delegation.

The Chair of the meeting, Emeritus Professor of the Law School of Thessaloniki Ms. Anastasia Grammatikaki-Alexiou, who has repeatedly represented Greece in the works of the Plenary or Committees of the Hague Conference, and has taught at the  Hague Academy of International Law, outlined ‘[t]he great contribution of the Hague Conference in the field of private international law’.

Directly from the USA, the President of the American Association of Comparative Law, Professor of the Law School at Willamette University, Mr. Symeon Symeonides, who participated in the work of the 2019 Convention as the representative of the Republic of Cyprus, gave his valuable thoughts on the topic. Professor Symeonides presented the theme ‘The Hague Treaty for the Recognition of Foreign Decisions-The Lowest Common Denominator’, identifying the most interesting points of the Convention and highlighting critical aspects of its text.

Judge Dimitrios Titsias, Justice Counselor, Permanent Representation of Greece to the EU, explored ‘[t]he limits of EU’ s external jurisdiction over the Hague Conventions’. The rest of the panel analyzed the individual provisions of the Hague Conventions, which will be of considerable concern to our courts in the near future. Dr. Ioannis Revolidis, Lecturer of Media, Communications and Technology Law at the University of Malta, discussed the topic of the ‘Recognition and enforcement of international judgments after the revival of the Hague Convention’; Ms. Anastasia Kalantzi, Doctoral Candidate at the Aristotle University of Thessaloniki analyzed the topic ‘Points of convergence and divergence of the Hague Convention of 2005 and Regulation 1215/2012 on issues of extension of jurisdiction’; Dr. Vassilios Sarigiannidis, Head of the competent authority at the Ministry of Justice, presented the issue of ‘The system of cooperation between Central Authorities in the framework of the implementation of the 1980 and 1996 Hague Conventions on the protection of children’.

Among the judgments presented in this issue, a special mention has to be made of the following: the ECJ decision of 18.5.2021, Asocia?ia ‘Forumul Judec?torilor din Rumania’, with a comment by the associate in the International Hellenic University Ms. Raf. Tsertsidou, on the relationship between the regulations on the organization of justice in Romania and the requirements of the rule of law and the independence of the judiciary; the ECJ decision of 9.9.2021, Toplofikatsia Sofia, with a case comment by Judge Mr. Ant.Vathrakokilis; the ECJ decision of 3.9.2020, mBank S.A./PA, with a case comment by Judge Ms. St.-Ag. Kapaktsi.

Concerning national court decisions, it is worth mentioning the 2020 Supreme Court of Cyprus judgment (No 122/13, 143/13), with a case comment by Cypriot jurists Dr. N. Mouttotos, University of Bremen, and Dr. N. Kyriakides, University of Nicosia, regarding the effect of the Directive No 93/13 on consumer contracts in the reversal of the final judgment under national law; the judgment of the Greek Supreme Court No 820/2021, with a note by Dr. Ap. Anthimos and Solicitor (England/Wales) Dr. K. Voulgarakis, on the obstruction of the right to judicial protection by orders of courts of another Member State, which led to the submission of relevant preliminary question to the ECJ, as well as the decision of the Athens First Instance Court No 312/2019, with a case note by Dr. Ch. Meidanis, on the role of the jurisdiction of torts in case of the fall of a Greek warplane in a NATO exercise in Spain.

In the column of Scientific Topics, the volume hosts a study by Dr. G.-A. Georgiadis, on the 10-year anniversary of the 2007 Hague Protocol on the law applicable to maintenance obligations, while the L&F Praxis section presents the main problems of the EAPO, which raise many practical concerns, by Judge Mr. I. Valmantonis.

Out Now: Scraback on the Principle of Concentration of Conflicts in the Brussels... PhD/Research Assistant Positions at the University of Cologne
Scroll to top