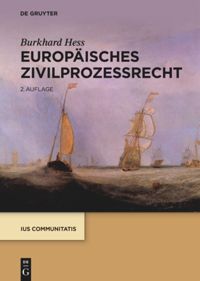 Just over ten years after the first edition of Europäisches Zivilprozessrecht (European Civil Procedure) by Burkhard Hess (director Max Planck Institute for Procedural Law, Luxembourg) a second –  even more voluminous and impressive – edition was published early 2021. While updating this book after a decade that marks not only the further expansion  but perhaps also the coming of age of European Civil Procedure is an immense task in itself, this new addition also expands in breadth. Particularly noteworthy is the new part on the interaction between European law and national civil procedure, including out-of-court procedures.

A must-read or even must-have for German readers having an interest in European Civil Procedure!

This reference book is an essential reading for academics, regulators, and practitioners seeking reliable and comprehensive information about the European law of civil procedure. It also addresses trainee lawyers and students interested in cross-border litigation and dispute resolution, as well as those who wish to specialize in European business law.