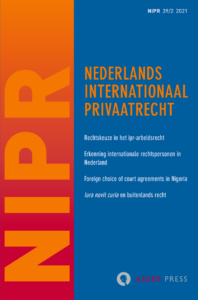 The second issue of 2021 of Dutch PIL journal, including both English and Dutch language papers, has just been published.

It includes these papers:

Okoli, An analysis of the Nigerian Court of Appeal’s decisions on foreign choice of court agreements in the year 2020 / p. 292-305

This contribution is a short summary of a PhD thesis defended at Erasmus School of Law on April 29th, 2021, on the legal maxim iura novit curia in relation to the application of foreign law in civil proceedings. The thesis is a result of a comparative research into Dutch, German and English law, as well as European law. It analyses, evaluates and recommends several approaches to the problem of foreign law in civil litigation. This contribution discusses, inter alia, the method of the thesis including its comparative approac