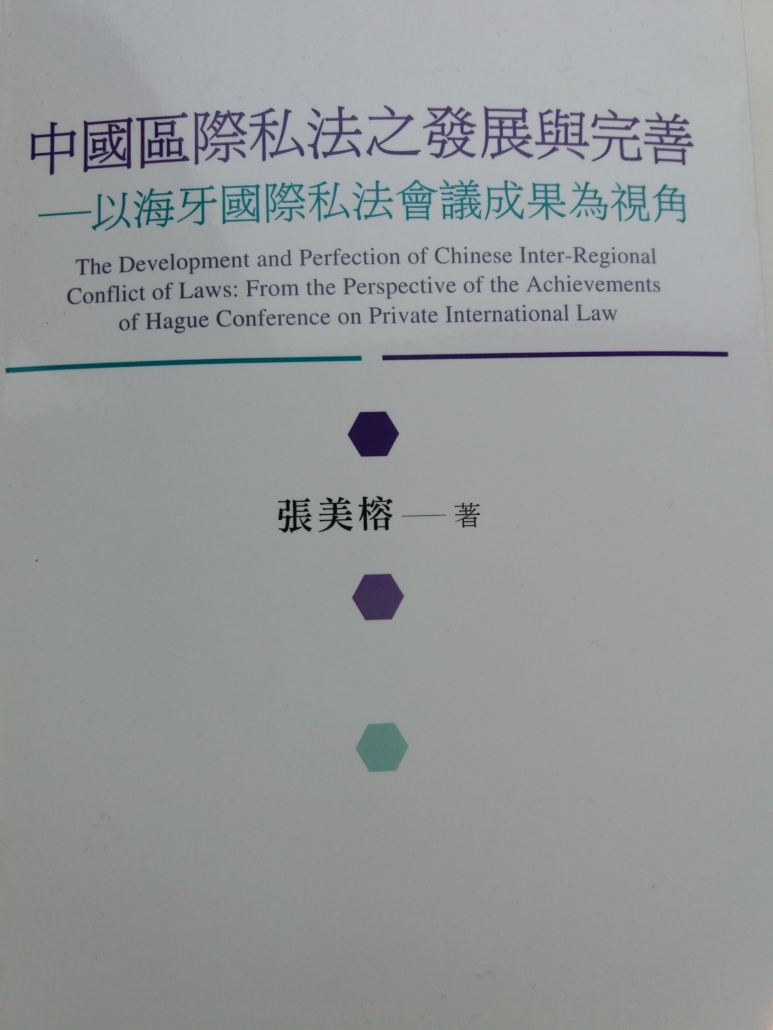 Readers of this blog may be interested in the book (in Chinese) entitled, The Development and Perfection of Chinese Inter-Regional Conflict of Laws: From the Perspective of the Achievements of Hague Conference on Private International Law. click here (angle.com.tw), written by Meirong Zhang, associate professor at UCASS (University of the Chinese Academy of Sciences) Law School, Beijing.  It should be noted that this book was published in early 2020.

“Mainland China, Hong Kong Special Administrative Region (SAR), Macao SAR and Taiwan not only all have their own systems of substantive civil, commercial and procedural law, they also have their own rules of private international law or conflict of laws. As a result, each region has its own rules to determine whether its courts and authorities have jurisdiction to deal with a civil or commercial issue, what law applies to such issues, whether, and under what conditions, a foreign judgment may be recognised and enforced, and how to organize administrative and judicial assistance to foreign jurisdictions. Moreover, these rules apply, in principle, not only in the relations between each region and third States, but also in the relations between the four regions.

In this pioneering work, Meirong Zhang analyses the existing diversity of private international law systems in the four Chinese regions, and explores ways to better coordinate these rules, and improve communication and cooperation among the regions. In our days of increasing mobility of persons, goods, services, capital and information, both among the Chinese regions and in their relations with third States resulting in multiple and manifold cross-border legal issues, this is a question of eminent practical importance. Central to this study are the daily interests and concerns of individuals, families, companies and other entities in our increasingly interconnected, complex world.

The author has wisely chosen an approach to her research that is principled and pragmatic at the same time. Her starting point is the Chinese concept of “regional pluralism of legal systems”.

She points out that this principle has three dimensions: “first, equality between different legal regions; second, understanding and respect for each legal region’s characteristics and its autonomous public policy; third, mutual progress and benefits for all four legal regions based upon cooperation between the people across all four legal regions”. Therefore, mutual respect, based on the recognition of equal value of each legal system, and cooperation grounded in mutual respect should govern the future of interregional private international law in China.

Whilst “regional pluralism of legal systems” is the starting point, Meirong Zhang adds a second pillar to support her proposals: “Chinese inter-regional conflict of laws should also be the carrier of the good values and spirit of mankind”. It would be a mistake to view this as an expression of naive idealism, and to think that it would suffice to focus on the interregional situation isolated from the rest of the world. Firstly, the increase in interregional cross border contacts among the four Chinese regions is in part the result of increased global interaction. Indeed contemporary globalization blurs the boundaries between local including interregional, and global affairs as never before. Secondly, and in part as a result of globalization, people all over the world are increasingly faced with challenges common to humankind, whether one thinks of the risks to which children around the world are exposed in cross-border situations, the global financial system, or the global climate. Global issues should preferably [be] solved globally. Common global approaches based on sound values are not only desirable but in the end also more effective.

Basing her proposals on the two pillars “regional pluralism of legal systems” and “a community with a shared future for humanity”, the author turns to the work of the Hague Conference on Private International Law for inspiration for the future development of private international law among the four regions of China. She has good reasons to do so. Firstly, as she points out, to a various extent and in various ways, the private international law systems of all four regions have already been influenced by the work of the Hague Conference. Secondly, as she also reminds us, arrangements have recently been concluded between Chinese regions, namely Mainland China and Hong Kong SAR, which have borrowed provisions and language from Hague Conventions. Thirdly, and most fundamentally, the Hague instruments reflect both the spirit of the Chinese concept of “regional pluralism of legal systems” – mutual respect, based on the recognition of equal value of each legal system, and the need for close cooperation on that basis – and globally accepted values. All Hague instruments are carefully crafted texts, and the result of inclusive negotiations among experts and delegates representing States from all continents, based on sound comparative research and input from stakeholders from across the world.

Hague Conventions are primarily aimed to provide common legal frameworks for relations between States, and provide expressly that ratifying States are not bound to apply them to conflicts solely between different legal systems with such States. Therefore, when China joins a Hague Convention, the rules of that Convention do not thereby apply to the relations between Mainland China and the other three regions. However, as the arrangements between Mainland China and Hongkong SAR demonstrate, they may provide a model for a private international law regime for interregional relations. A model, not a straightjacket: Hague Conventions have always made room for specific local including regional needs.

It is on this basis that Meirong Zhang then examines whether and to what extent the work of the Hague Conference could serve as inspiration for a common private international law framework for the four Chinese regions. Successively, she deals with the issue of jurisdiction of the courts and authorities of the four regions (Chapters 2-3), interregional choice of law rules (Chapters 4-7), administrative and judicial cooperation, and recognition and enforcement of foreign judgments (Chapters 8-10). She does not advocate to slavishly copy the content of Hague Conventions into an interregional system. For example, and interestingly, she suggests that the specific characteristics of Chinese family realities may qualify or colour the notion of “the child’s best interests” (Conclusion Part II).

Obviously, an innovative work like this can only lay the foundation for more detailed reflections and research. But because the study is both principled and pragmatic, the groundwork it lays is strong. One senses the firm commitment of the author to the good causes of removing outdated and parochial obstacles to cross-border relationships and transactions, of facilitating the life of citizens in a complex mobile world, of safeguarding their civil interest and rights, of protecting weaker parties and vulnerable people and vital public interests and common global goods. Meirong Zhang has written a seminal study that will inspire many readers. It deserves a wide readership.” (Our emphasis)

UNCITRAL Model Law on Cross-Border Insolvency: No recognition for a US reorganization... CJEU judgment on jurisdiction for unpaid public parking ticket in Obala i lucice,...
Scroll to top