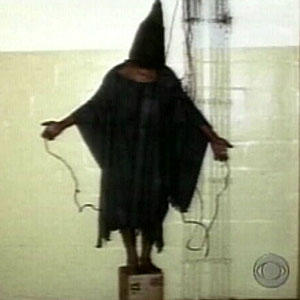 Four Iraqis who were detained in Abu Ghraib have sued U.S. military contractors before American courts. The cases were filed on June 30, 2008, in federal courts of Maryland, Ohio, Michigan and Washington state, where individual contractors reside. The plaintiffs are represented by law firms in Philadelphia and Detroit and by the Centre for Constitutional Rights.

Details on the parties can be found here.

The cases raise an interesting issue of choice of law. Which law will U.S. courts apply? The four complaints (which can also be found here) address the issue superficially, by stating that the laws of the United States have been violated, which seems to imply that they govern. Here is an excerpt of one of the complaints, but they are all drafted similarly:

48 [Contractors] knew that military officials were prohibited from torturing prisoners by the Army Field Manual and other controlling law, and that any military official who were doing so were violating the law.

50 For example, in its Initial Report to the UN Committee Against Torture, the US Department of State note that “[t]orture is prohibited by law throughout the US. It is categorically denounced as a matter of policy and as a tool of state authority …. No official of the government, federal, state or local, civilian or military is authorized to commit or to instruct anyone else to commit torture. Nor may any official condone or tolerate torture in any form” (…) The State Department’s Report on Human Rights Practices characterized the following as prohibited forms of torture: mock executions, sensory deprivation, repeated slapping, exposure to cold, stripping and blindfolding, food and sleep deprivation, threats to detainees or family members, dripping water on the head, squeezing of the testicles, rape and sexual humiliation.

51 [Contractors] knew that the ban on torture is absolute and no exigent circumstances permit the use of torture.

52 [Contractors] knew that the US intended and required that any person acting under the contract to the US would conduct themselves in accord with the relevant domestic and international laws.

53 [Contractors] knew and understood that the US does not condone torture of prisoners.

54 Defendants cannot credibly claim that the wrongful and criminal conduct of certain military and government personnel misled them into thinking that the torture of prisoners was lawful and permissible.

Given that American federal courts apply state choice of law rules, the issue will likely be addressed differently by each of the four district courts. Most readers will of course be aware that while a few American states still follow the traditional approach, most have moved on to the so called “modern approach”, such as interest analysis. Although the complaints refer to the Army Field Manual and to the contract concluded by the contractors, this looks to me like a tort action. The complaints also rely on the Alien Tort Claims Act (though solely for jurisdictional purposes), so the plaintiffs may argue that public international law applies.