The third issue of 2017 of the Rivista di diritto internazionale privato e processuale (RDIPP, published by CEDAM) was just released. 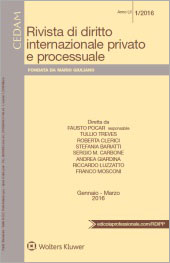 Manlio Frigo, Professor at the University of Milan, ‘Methods and Techniques of Dispute Settlement in the International Practice of the Restitution and Return of Cultural Property’ (in English)

This article focuses on the international practice in the field of cultural property disputes and examines the most effective and reliable dispute resolution methods in restitution and return of cultural property. Particularly in cases of disputes between Governmental authorities and foreign museums concerning the return or restitution of cultural property, one of the privileged solutions may consist in negotiating contractual agreements. The recent international and Italian practice have proved that these agreements may either prevent any judicial steps, or lead to a conclusion of pending administrative or judicial proceedings and have been successfully tested in recent years, more frequently within a wider frame of agreements of cultural cooperation. These agreements provide new forms of cooperation between the parties involved in such disputes and represent a mutually beneficial way out with a view to a future of collaboration.

Zeno Crespi Reghizzi, Associate Professor at the University of Milan, ‘Succession and Property Rights in EU Regulation No 650/2012’ (in English)

In modern systems of private international law, “succession” and “property rights” form the subject matter of distinct conflict-of-laws provisions, with different connecting factors. Drawing the line between these two categories implies a delicate characterisation problem, which now has to be solved in a uniform manner in all the Member States, by interpreting the scope of Regulation No 650/2012. Compared to the solutions traditionally adopted by the national systems of private international law, Regulation No 650/ 2012 has increased the role of the lex successionis, which now governs not only the determination of the heirs and their shares in the estate, but also the transfer of the assets forming part of the succession estate. This solution gives rise to several coordination issues which are examined in the present paper.

Federica Falconi, Researcher at the University of Pavia, ‘Il trasferimento di competenza nell’interesse del minore alla luce dell’interpretazione della Corte di giustizia (‘Transfer of Jurisdiction in the Child’s Best Interests in Light of the Interpretation by the Court of Justice’; in Italian)

By way of exception, Article 15 of Regulation (EC) No 2201/2003 allows the court having jurisdiction to transfer the case, or a specific part thereof, to a court of another Member State, with which the child has a particular connection, provided that this latter is better placed to hear the case in the light of the best interests of the child. Based on the forum non conveniens doctrine, such a provision confers judges with significant discretion, with a view to ensure the best interests of the child in line with Article 24 of the EU Charter of Fundamental Rights. The aim of this paper is to illustrate the main features of this original mechanism, by looking firstly to its effects on the general grounds of jurisdiction established by the Regulation and then focusing on the strict conditions set out for its application. Particular attention is paid to the assessment of the child’s best interests, which appears most problematic as the relevant factors will in fact vary depending on the circumstances of the case. In this regard, some guidance has been recently provided by the Court of Justice, that has pointed out that the court having jurisdiction may take into account, among other factors, the rules of procedure in the other Member State, such as those applicable to the taking of evidence required for dealing with the case, while the court should not take into consideration the substantive law of that other Member State, which might be applicable if the case were transferred to it. The Court of Justice has further clarified that the court must be satisfied, having regard to the specific circumstances of the case, that the envisaged transfer of the case is not liable to be detrimental to the situation of the child concerned.

Next post: New Research Positions at the MPI Luxembourg

Previous post: A Latest Article on Recognition and Enforcement of Foreign Judgments in PRC (Mainland China)