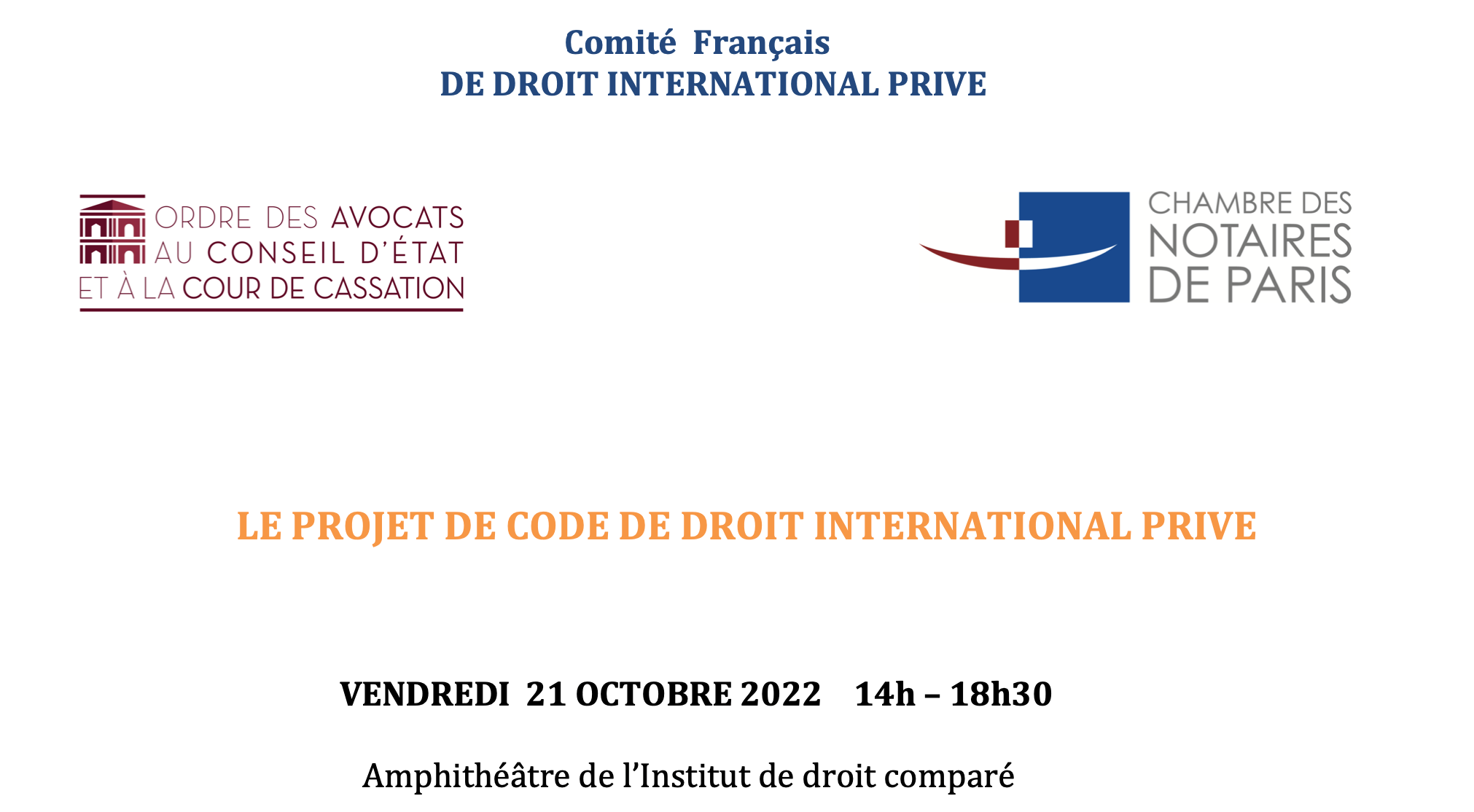 On Friday October 21 the Comité français de droit international privé held a special session devoted to the last and possibly final version of the project of code of private international law. As such, the project consists of 207 articles divided into 6 books: general rules, special rules, procedure, recognition and enforcement of foreign acts and judgments, provisional and protective measures, transitional provisions.

The session was held “à huis clos” with the discussion among members stimulated by foreign guests specially invited to have a perspective from abroad. Not surprisingly, due weight was given to Switzerland and Belgium, as the former is considered to have a model legislation on the discipline and the latter has the “youngest” statute of continental Europe. Marc Fallon underlined the very different circumstances in which the Belgian legislation was constructed, since it came from a private initiative of Belgian academics, only at a later stage submitted to the Belgian legislator. The opposite path has led to the drafting of the French project, which stems directly from an initiative of the Ministry of Justice. In France, this project is the fourth in time after those by Niboyet (1950), Batiffol (1959) and Foyer (1967). If successful, it will bring to an end the essentially doctrinal and jurisprudential character of French private international law. These traditional characteristics of French private international law were recalled by Pierre Mayer in an already nostalgic note. Andrea Bonomi offered both a Swiss and European perspective, with laudatory remarks on the main innovations of the project: the codification of rules on procedure and on procedural measures, and the codification of the “méthode de la reconnaissance”. Reference is thereby made to the renowned French theory which has developed Picone’s observations on the opportunity of recognising the competence of a legal order (l’ordinamento competente) as a whole to decide a cross-border issue, instead of applying such a foreign order’s rules to decide the same cross-border issue within the forum. This method (or methods, according to subsequent works of the author of the theory, Pierre Mayer), is gaining importance in contemporary practice. On the one hand, the increasing mobility of citizens raises the number of conflicts of laws and creates an appetite for hard and fast solutions. A method allowing to displace the discussion from substance to competence of the authority serves this need. In addition, it is particularly welcome in the EU, where it is coherent with the prevalence of the evaluations of the “country of origin”.

Other rules applauded by the audience were those on public policy and fraude à la loi, although regret was expressed over the fact that these well-known denominations are not mentioned in the corresponding rules (Articles 11 and 12). The rule on public policy is among the many of the project that reveals a constant attention by the drafters to coordinate national rules with the European ones: it explicitly grants a role to the “European notion of public policy”.

Possibly the most controversial rules are those on filiation resulting from IVF with a donor and on surrogacy (Articles 62 and 63). In this respect, the project breaks with French precedent and adopts a solution based on the respect of the legitimate expectations of donors, intended parents and the gestational mother: the lex loci actus.

According to the drafters, legal certainty for all parties involved points to the application of the law of the country in which assisted reproductive technology (ART) was performed or surrogacy was agreed by contract and implemented. These rules represent an exception to the general ones (Article 59), which point to the law of the child’s citizenship at the moment of birth. Article 62 seems to be of limited utility, since it merely confirms that French clinics need to follow French law and vice versa. However, as regards the filiation of children born with the employment of a donor by means of an IVF performed in a foreign fertility clinics, the applicable law will depend on the place of birth. If the latter is in France, the presumptions of paternity of French domestic law will apply in the first place. The scope of application of the foreign law of the country in which the clinic is based will thus be limited to the aspects related to the right of the child to have access to information regarding the donor. In addition, the lex loci actus would open the French border to reproductive tourism and, in so doing, would create the conditions to prevent the need of further strategic litigation before the ECHR in order to decriminalise surrogacy. Some critical voices have observed that the present domestic and international context are too fragile for such a solution to be welcome. The inherent risk is that the advancement in a wider recognition of “a right to parenthood”, including “parenthood for all” may increase existing divisions and undermine the credibility of the universal character of the principle of non-discrimination.

Divisions also exist as regards the timeliness of the code. Paul Lagarde raised his authoritative voice, in the columns of the last issue of the Revue critique, against the very idea of devoting energies to a national code of private international law. The engagement for the French code reveals, he argued, the availability of resources that could have been better employed to contribute to the drafting of a comprehensive code of European private international law based on the numerous existing regulations.

The four panels of the debate allowed a comprehensive analysis:

All distinguished participants engaged in the rich and deep discussion triggered by the analysis of the project are looking forward to future arenas where the debate can continue.