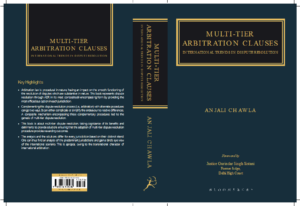 Streamlining disputes has become imperative to reduce the judicial caseload. One may presume that resorting to arbitration or other forms of ADR when the parties wish to resolve their issues amicably might provide them with a speedier remedy. Considering that commercial disputes now are extensively complex and cumbersome, there arose a need for a more evolved dispute resolution mechanism that could cater to the needs of each contract or dispute in a customised manner. MTDR can aid in doing so. It entails successfully employing different kinds of ADR for the same dispute in case there is no resolution. However, MTDR comes with its fair share of issues, such as reservations amongst the parties, lack of rules governing such procedures, limitation period, lack of party cooperation and the non-binding nature of certain forms of ADR. These pertinent questions are merely the tip of the iceberg when it comes to Multi-Tiered Dispute Resolution. The objectives of Alternative Dispute Resolution are saving time and reducing costs. At the end of the day, it is imperative to answer whether Multi-Tier Dispute Resolution is viable in achieving these objectives or if it will manifold the complexities involved in the process. Yet if there is even a possibility of settling disputes or at least parts of the dispute amicably, this concept is worth a chance. Despite the United Nations’ endeavours to promote uniform interpretations of the arbitration law worldwide, several nations have taken varying stands on the enforceability of certain dispute resolution procedures, calling for a study of the varying standards in different jurisdictions. For any dispute resolution mechanism to be effective, the codified law and the jurisprudence of a particular state need to be conducive to enforcing the process adopted by the parties. Thus, in-depth analysis and critical review of this subject’s laws and judicial pronouncements have been demonstrated. This book aims to assist the reader in overcoming the issues that one might face with MTDR in a wide range of jurisdictions to make this process of dispute resolution useful, effective and fruitful. The book covers MTDR in different jurisdictions like the UK, USA, France, Canada, Australia, Singapore, Germany, Hong Kong, China, Taiwan and India. The functionality of any reform, particularly one that seeks to provide a multi-faceted solution, predominantly lies in the academic enrichment of the same. Policy and academia can only strengthen public awareness of Multi-Tier Dispute Resolution.

The Book is available for purchase on the Bloomsbury website using this link.

Anjali is an Assistant Professor at Jindal Global Law School, O.P. Jindal Global University. Anjali holds an LL.M. in International Commercial Arbitration Law from Stockholm University (SU); and B.A. LL.B. (Hons.) degree from Jindal Global Law School, O.P. Jindal Global University, Sonipat (India). She is also a qualified lawyer at the Bar Council of India. She has also been advising domestic and international clients regarding commercial and civil disputes. Anjali is also acting as a Dispute Resolver (Mediator/Arbitrator/Conciliator) for various ODR platforms. Anjali sits on the Editorial Board of Legal Maxim and the Review Board of Syin & Sern.

Today begins the first meeting of the Special Commission to review the practical...EAPIL-BIICL Seminar on the Rome II Regulation
Scroll to top