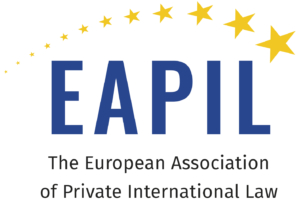 From 2 to 4 June 2022, the founding conference of the European Association of Private International Law (EAPIL) took place in Aarhus. After the idea of founding the association had emerged at a conference in 2018 and its incorporation in 2019, it offered an opportunity to discuss fundamental issues of private international law in Europe with about 150 participants.

In his keynote speech at the kick-off event on Thursday, Peter Arnt Nielsen (Copenhagen Business School) outlined the development of the institutional framework and its significance for European conflict of laws. Andreas Stein (European Commission) addressed current legislative projects in his report from Brussels. Particularly, he highlighted the recently published Directive proposal on “Strategic lawsuits against public participation” (SLAPPs). Subsequently, drawing inspiration from AG Maciej Szpunar’s report from Luxembourg on current fundamental rights issues in private international law, the conference especially discussed the significance of the EU Charter of Fundamental Rights with great enthusiasm, including SLAPPs and the recognition of foreign judgments.

On Friday morning, the presentations and discussions concentrated on digitalisation, with particular attention to platforms, blockchains, the transfer of digital assets and the digital resolution of cross-border disputes. Several speakers and participants addressed the challenging question of the extent to which new technologies require special treatment in private (international) law. In the afternoon, the focus was on the phenomenon of fragmentation in European private international law, which led to a lively debate on the need for a coherent general instrument or codification of EU conflict of laws. After the speakers had expressed themselves rather neutrally or even partly positively on the phenomenon, several participants in the discussion spoke rather in favour of stronger coordination.

At the general assembly, the association’s past and future activities and participation opportunities for members in seminars, working groups and a Young Researchers Network were presented. The Secretary General, Giesela Rühl (Humboldt-University of Berlin), was happy to announce that the association already had 389 members from 63 countries. Since practitioners can also become members, the association fosters the exchange between science and practice, which was clearly seen at the conference in several contributions to the discussion on the user-friendliness of European legal acts. Further information on the EAPIL can be found here.

All in all, the conference offered – also thanks to the organisation by Morten M. Fogt (University of Aarhus) and his team – an excellent opportunity for academic exchange, which so many participants missed in recent years. The full program of the conference and an overview of the speakers are available here.

ECJ on the interpretation of the European Succession Regulation in relation... AI systems and non-contractual liability: A European Private International...
Scroll to top