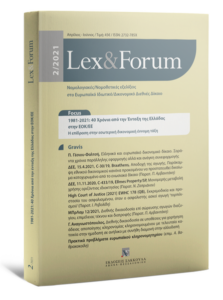 The third issue of the Lex & Forum is dedicated to the topic of the limits of private autonomy in the EU. The preface was prepared by Professor Emeritus and President of the International Hellenic University Athanassios Kaissis. The central topic of the present issue (Focus) is further elaborated by the contributions of Professor Spyros Tsantinis on the importance of private autonomy in European and international procedural law, and of Dr. Konstantinos Voulgarakis on the protection mechanisms in the case of choice of court agreements. Furthermore, Dr. Stefanos Karameros is analyzing the extension of the choice of court agreements in case of privies in law or privies in blood, after the Kauno Miesto decision.

The Focus of this issue is further enriched by the contributions of Judge Dimitrios Titsias on private autonomy in family law, and of Judge Antonios Vathrakokoilis on the choice of applicable law by the diseased according to the EU Regulation No 650/2012. The Focus also contains the analysis of Professor Komninos Komnios on the execution of judgments on investment arbitration within the EU after the Achmea case and the examination of Dr. Nikolaos Zaprianos on the applicable law in online consumer disputes.

The Focus is further enriched by selected case law and, amongst others, the judgment No 362/2020 of the Herakleion Court of First Instance on the subjection of hotel contract cases under the exclusive jurisdiction of immovable property, with a case note by Anastasia Kalantzi, the judgment No 13.2.2020, n. 3561 by the Italian Cassazione Civile (S.U.), on the relationship between the provisions of the Montreal Convention and a prorogation agreement in case of airplane transport, with a case note by Judge Ioannis Valmantonis, and the case 3 Ob 127-20b of the Oberster Gerichtshof on the scenario of parallel non-exclusive prorogation and arbitration clauses, with a case note by Dr. Ioannis Revolidis. Finally, the Focus is concluded by Dr. Apostolos Anthimos’s case note on the Greek Supreme Court (Areios Pagos) judgment No 767/2019, regarding the execution of an American judgment that lost its validity domestically.

The scientific topics of the present issue consist of the contribution of Professor Paris Arvanitakis on the issue of asymmetrical choice of court agreements.

Lex&Forum is renewing its appointment with its readers in the upcoming issue, dedicated to the latest updates concerning the Hague Convention for the unification of private international law, especially after the EU’s succession.

Call for Abstracts: The Protection of Economically and Socially Weaker Parties...AMEDIP: The programme of the XLIV Seminar is now available
Scroll to top