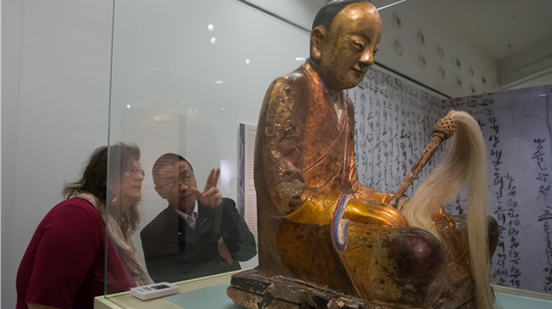 By Zhengxin Huo, Professor of Law, China University of Polit’l Science and Law; Associate Member of International Academy of Comparative Law; Observer of the UNESCO 1970 Convention. Email: zhengxinh@cupl.edu.cn. The author would like to thank Dr. Meng YU for valuable comments.

On 4 December 2020, the Sanming Intermediate People’s Court of China’s southeastern Province of Fujian rendered a judgment ordering the Dutch defendants to return a stolen 1,000-year-old Buddhist mummy, known as the statue of Zhanggong-zushi, to its original owner: two village committees in the Province within 30 days after the verdict comes into effect. [1]

This is the first time in history that a Chinese court seized jurisdiction over a case filed by Chinese plaintiffs to repatriate a stolen cultural property illicitly exported. Once published, the judgment has aroused immediate attention both at home and abroad. Given the enormous quantity of Chinese cultural property stolen and illegally exported overseas, the potential influence of the judgment can hardly be overstated. This note focuses on the major legal issues that the Chinese judgment dealt with and attempts to analyse the role of private international law that has played.

Oscar Van Overeem, a Dutch architect, purchased a Buddhist statue for 40,000 Dutch guilders (US $20,500) in 1996 from a collector in Amsterdam who had acquired it in Hong Kong. In 1996, Van Overeem contacted a restorer to repair some chips and cracks in the exterior. When the restorer opened the bottom of the statue, he found two small pillows, and resting on the pillows, the body of a mummified monk. Initial radiocarbon testing found that the body was approximately 900-1000 years old. The statue was taken to the Meander Medical Center in Amersfoort, where a full CT scan was performed and samples taken through endoscopy. The investigative team found scraps of paper on which Chinese characters were written, placed inside the body in the cavities normally containing organs. These identified the Buddhist mummy as the mummy of a monk known as “Zhanggong-zushi”.

In 2014, Van Overeem loaned the statue to the Drents Museum in Assen for an exhibition, “Mummy World,” which traveled to the Hungarian Natural History Museum in the spring of 2015. Press reporting on the Hungarian exhibition alerted the Chinese villagers. Based on photographs from Hungary and archival materials in China, the Chinese villagers believe the statue is the one that have held the mummy of the village’s patriarch, Zhanggong Zushi. The statue was enshrined in the Puzhao Temple, jointly owned by the two villages named “Yunchun” and “Dongpu”, and worshiped by the local residents, for over 1,000 years until it went missing in December 1995.

After an unsuccessful negotiation, the Committee of Yunchun Village and the Committee Dongpu Village sued Van Overeem to demand the statue’s return both in Fujian Province of China and in Amsterdam of the Netherlands at the end of 2015,[2] fearing that a statute of limitation might bar their case. Three years later, the Amsterdam District Court made a decision on 12 December 12, 2018, [3] ending one chapter in the legal battle over the statue of Zhanggong-zushi, but failed to resolve a controversial situation or illuminate the path forward for the parties, as the Dutch court did not decide anything about the ownership of the parties.[4] It simply determined not to hear the case, based on its finding that the two village committees did not have standing to sue in the Dutch court.[5]

Against this background, the lawsuit before the Chinese court is more important in terms of legal analysis. According to the information released by the Sanming Intermediate People’s Court (the Court), it formally filed the case on 11 December 2015, which then served the Dutch defendants by international judicial cooperation. The Court, thereafter, held the hearings on 26 July and 12 October of 2018 respectively, and publicly pronounced the judgement on 4 December 2020.[6] Lawyers of both sides were present both at the hearings and the pronouncement of the judgement. From the perspective of private international law, the following two issues, among others, are particularly worth of concern:

(1) Jurisdiction: The Court exercised the jurisdiction over the dispute because the Dutch defendants did not raise an objection to its jurisdiction who responded to the action timely.[7]

(2) Application of Law: Based on the interpretation of “the lex rei sitae at the time that the legal fact occurred” in Article 37 of the Private International Law Act, the Court held that Chinese law, rather than Dutch law, shall govern the ownership of the statue.[8]

In international civil litigation, many cases involve a foreign defendant not domiciled or residing within China. Given the importance of some of such cases, the CPL empowers Chinese courts the jurisdiction over actions involving contract disputes or disputes over property rights against a non-resident defendant if certain conditions are satisfied. Article 265 of the CPL prescribes the following:[11]

In the case at hand, one can hardly argue that the Court has the jurisdiction under Article 265 of the CPL, as the statue is not located in China when the action was filed, nor did the defendants steal it or purchase it in China, nor do they have distrainable property or representative office in China. However, the Court ruled that its jurisdiction over the case was established pursuant to the prorogated jurisdiction under the CPL regime.

Since the defendant’s failure to object constitutes consent to jurisdiction, it is imperative that defendants, foreign defendants in particular, raise a timely jurisdictional objection. Under Article 127 of the CPL, if a party to a civil action objects to the jurisdiction of a People’s Court, the objection must be raised within the time period prescribed for the filing of answers. According to Articles 125 and 268, defendant shall have fifteen days, or thirty days if residing outside the territory of China, to file his answer upon receipt of plaintiff’s complaint. Thus, if a defendant wants to challenge the People’s Court’s jurisdiction, he must do so within this statutory fifteen-day or thirty-day period.[13]

However, the question of application of the lex rei sitae in specific cases remains open out of diverse possible interpretations of the rule. From the perspective of comparative law, it can be found that many jurisdictions, say England, prefer to apply the law of the place of last transaction,[14] while others, say France, apply the law of place where goods are located at the time of the litigation.[15] As far as China is concerned, its courts has never clarified the meaning of the lex rei sitae in Article 37 of the Private International Law Act; therefore, the outcome of the present action was entirely dependent on the interpretation of this article.

The Chinese plaintiffs commenced the action for recover of the stolen statue by arguing, among other things, that they are its owners because bona fide acquisition does not apply to stolen cultural property under the Property Law of China. The Dutch defendants took the stand, claiming to have purchased the statue on good title under Dutch Civil Code. Thus, it had to be decided which of the two laws shall be used in the present case: whether Chinses law or Dutch law shall govern the ownership of the statue. The Court, by resorting to Article 37 of the Private International Law Act, held that title was to be determined by Chinese law.

However, the Court acknowledged that the statue was stolen and illicitly exported before the implementation of the Private International Law Act, therefore, it had to decide in the very beginning whether the Act is applicable to the present dispute. To determine the issue, the Court referred to Article 2 of the Judicial Interpretation on the the Private International Law Act issued by the Supreme People’s Court,[16] which states that:

As to a civil relationship involving foreign elements which occurred before the implementation of the Private International Law Act, People’s Court shall determine the governing law according to the choice-of-law rules effective at the time of the occurrence of such relationship. In case no choice-of-law rules existed at that time, the Private International Law Act may be resorted to in order to determine the applicable law.

Hence, the Court decided that the lex rei sitae at the time when the legal fact occurred should be understood as the lex furti, i.e., law of the location of a cultural property had been stolen, insofar as such interpretation favours the protection of cultural heritage and facilitates the return of cultural property illicitly trafficked, whereas the place of transaction not only favours the laundering of stolen cultural property but also adds considerable uncertainty to the question of title.

The Court then referred to the Property Law of China under which bona fide acquisition does not apply to stolen cultural property. Consequently, the Court ruled that the Chinese village committees retain the title of the statue and demanded the defendants to return it to plaintiffs.

Under the CPL, judicial proceedings in China occur in two instances, namely, trial and appeal. Therefore, the Dutch defendants are entitled to appeal to the Higher People’s Court of Fujian Province within 30 days. If they do not appeal within the time limit, the judgment will become effective.

At the present stage, it is not clear whether the defendants will comply with the judgment or appeal, or simply ignore it. Though as a Chinese, I do hope that the Dutch defendants will return the statue as ordered by the Court; nevertheless, I am afraid that ignoring the Chinese judgment may be one of their reasonable options because of serious obstacles to recognize and enforce this Chinese judgment in the Netherlands.

In spite of the uncertainty ahead, one cannot overestimate the significance of this judgment. First of all, as noted in the very beginning, this is the first time that a Chinese court exercises the jurisdiction over case to recover a Chinese cultural property stolen and illicitly exported. Therefore, it is a historic judgment, no matter it will be enforced or not in the future.

Second, the Court in the judgement clarified for the first time that “lex rei sitae at the time when the legal fact occurred” in Article 37 of the Private International Law should be interpreted in the light of the object and purpose of the 1970 Convention and the 1995 Convention, so that the lex furti, i.e., Chinese law, shall govern the ownership of cultural property lost overseas. Given the huge number of Chinese cultural property stolen and illicitly exported abroad, the author believes the impact of the judgment is tremendous.

[17] The General Principles of Civil Law was adopted at the Fourth Session of the Sixth National People’s Congress on April 12, 1986, coming into force on January 1, 1987. It was abolished on January 1, 2021 when the Civil Code of the PRC took effect. For a quite a long period, the GPCL was the most important source of Chinese private international law. Structurally, the GPCL has devoted an entire chapter to regulating the conflict of laws (i.e., Chapter Eight, Application of Laws to Civil Matters Involving Foreign Elements), where nine conflict rules can be found.

The Second Wave of the COVID-19 Pandemic and Force Majeure Introduction to the Elgar Companion to the Hague Conference on Private International...
Scroll to top