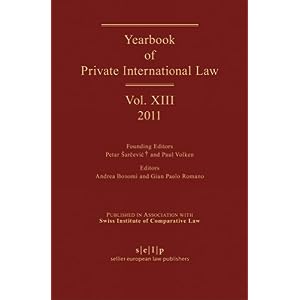 The official announcement reads as follows:

The current volume of the “Yearbook of Private International Law” includes three special sections: The first one is devoted to the recent European developments in the area of family law like the proposal on the matrimonial property régimes in its relation with other EU instruments, such as Brussels IIbis or Rome III. Another special section deals with the very hotly debated question of the treatment of and access to foreign law. The third one presents some recent reforms of national Private International Law systems. National reports and court decisions complete the book.

The Yearbook includes the following contributions: