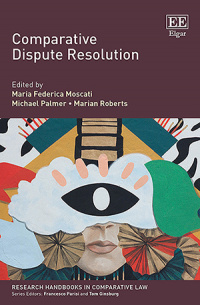 The blurb reads as follows:

Comparative Dispute Resolution offers an original, wide-ranging, and invaluable corpus of chapters on dispute resolution. Enriched by a broad, comparative vision and a focus on the processes used to handle disputes, this study adds significantly to the discourse around comparative legal studies.

From a comparative perspective, this Research Handbook analyses the field of dispute processing, generally and across a broad range of legal systems and their legal cultures. It explores the nature of disputes and the range of basic processes used in their resolution, examining emerging issues in theory and practice and analysing differing traditions of dispute resolution and their ‘modernization’. Offering a balanced combination of theory and praxis, chapters present new understandings of theoretical, comparative and transnational dimensions of the manner in which societies and their legal systems respond to difficulties in social relations.

Showcasing opportunities for new research and debate, Comparative Dispute Resolution will be helpful to practitioners and others engaged in the practice of handling disputes. Students and scholars in disciplines such as law, sociology, politics and psychology will also find this topical Research Handbook useful in their understanding of the theory and practice of disputing and dispute management, legal reform and enhanced access to justice.

More information on the book can be found here