by Apostolos Anthimos on November 6, 2019

In a case concerning the declaration of enforceability of a UK costs order, the Supreme Court of the Hellenic Republic decided that the ‘excessive’ nature of the sum (compared to the subject matter of the dispute) does not run contrary to public policy. This judgment signals a clear-cut shift from the previous course followed both by the Supreme and instance courts. The decisive factor was the principle of mutual trust within the EU. The calibre of the judgment raises the question, whether courts will follow suit in cases falling outside the ambit of EU law.

by Apostolos Anthimos on October 9, 2019 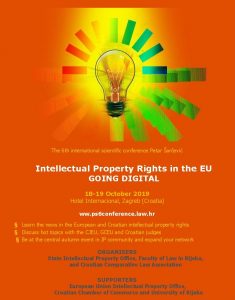 The 6th Petar Sarcevic International Scientific Conference titled “Intellectual Property Rights in the EU: Going Digital” will be held in Zagreb, Croatia, on 18 and 19 October 2019. The conference is structured in three sessions and will gather EU and national judges, practitioners and academics to discuss current topics in copyright, trademarks and designs, along with the issues in IP enforcement. The conference is co-organised by the Croatian IP Office,the Faculty of Law of the University of Rijeka and the Croatian Comparative Law Association, while the main supporter is the EUIPO.

The conference is in Croatian and English with simultaneous translation.

More information is available at the conference web page: ps6conference.law.hr or at ikunda@pravri.hr.

The Piraeus Court of Appeal refused recognition and enforcement of two English orders awarding damages for breaching a choice of court and a settlement agreement due to violation of the Greek procedural public policy.

The ruling forms part of the famous The Alexandros T saga. It comes as the expected step forward, after the judgment rendered by the English CoA in the case Starlight Shipping Company v Allianz Marine & Aviation Versicherungs AG (The Alexandros T [2014] EWCA Civ 1010. The latter decision has been already reported and criticized in our blog by Martin Ilmer. An extensive presentation and critical analysis of the judgment is also included in the doctoral thesis of my blog colleague, Mukarrum Ahmed, pp. 142-151. For a concise, however complete presentation of the case in its previous stages, see here. For a view in favor of the outcome in the UK courts, see here.  Read more...

Talaq reloaded: Repudiation recognized if application filed by the wife

by Apostolos Anthimos on September 9, 2019

A bit more than a year ago, I posted here & here about a Greek ruling on the non-recognition of an Egyptian notarized talaq divorce. The same court rendered mid-July a new judgment related to the same case; this time recognition was granted! It is the first decision of this nature in Greece, which will hopefully pave the path for the future.

Benedikt Windau, Judge at the Oldenburg District Court (Landgericht Oldenburg), runs a very interesting blog (in German), focusing on German Civil Procedure. In one of his recent postings, he presented a very interesting judgment of the Frankfurt CoA, related to the Service Regulation. Upon my request, he prepared an English version of his post for our blog.

A recent ruling of the Frankfurt Court of Appeals (Docket No. 13 U 210/17) will potentially shake up the (German) law of cross-border service quite a bit, as it imposes new, hence unknown obligations on the plaintiff – and its legal counsel accordingly.  Read more...

Greek Commentary on the ESCP Regulation 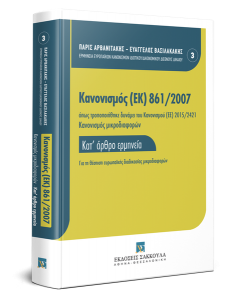 The first Commentary on the Small Claims Regulation (861/2007) in Greece has just been published. The volume sheds light on all aspects of cross border small claims litigation within the EU, approaching the topic both from a domestic and an EU-case law viewpoint.

The authors are the following:

An ordinary case for the recognition of a German order appointing a legal guardian became a sheer nightmare for the applicant. It took her twelve years in total, three decisions in Germany and another six in Greece, for finally being recognized as an appointed legal guardian of her husband…

The case is primarily interesting for German colleagues, given that it concerns the 1961 bilateral treaty on the recognition and enforcement of judgments between the two states; however, it serves as a general pattern for the selection of the proper applicable law in similar cases, irrespective of the nationality of the foreign judgment. More here.

The thing that should not be: European Enforcement Order bypassing acta jure imperii

In a dispute between two Cypriot citizens and the Republic of Turkey concerning the enforcement of a European Enforcement Order issued by a Cypriot court, the Thessaloniki CoA was confronted with the question, whether the refusal of the Thessaloniki Land Registry to register a writ of control against property of the Turkish State located in Thessaloniki was in line with the EEO Regulation.