For the fourth consecutive year, the Annual Conference of the Society of Legal Scholars (SLS) will feature a section dedicated to Conflict of Laws. This year’s iteration of the conference will take place from 1 to 4 September 2020 at the University of Exeter (more information here). The conveners of the Conflict of Laws section, Andrew Dickinson and Máire Ní Shúilleabháin, have kindly provided the following Call for Papers.

SLS Conflict of Laws Section: Call for Papers and Panels for 2020 SLS Annual Conference at the University of Exeter

This is a call for papers and panels for the Conflict of Laws section of the 2020 SLS Annual Conference to be held at the University of Exeter from Tuesday 1st  September – Friday 4th September.   Read more...

The XXth volume of the Yearbook of Private International Law has just been published. Ilaria Pretelli, who has edited this volume together with Andrea Bonomi and Gian Paolo Romano, has been so kind as to provide not only the following teaser but also the Table of Contents and Foreword to conflictoflaws.net.

The new 20th volume (2018/2019) of the Yearbook of Private International Law contains over 30 articles on the most important aspects of private international law by authors from all over the world. You will find inspiring articles on the law of non-recognised states, the American restatement on international arbitration, the recognition of so-called marriage for all in Europe and, highly topical, a contribution to the Hague Judgments Convention and the reform of the Brussels IIa Regulation.  Read more...

New Book: Recognition of Judgments in Contravention of Prorogation Agreements

Written by Felix M. Wilke, Senior Lecturer at the University of Bayreuth, Germany.

Must a foreign judgment be recognised in which a jurisdiction agreement has been applied incorrectly, i.e. in which a court wrongly assumed to be competent or wrongly declined jurisdiction? Within the European Union, the basic answer is a rather straightforward “yes”. Recognition can only be refused on the grounds set forth in Article 45(1) Brussels Ibis Regulation, and unlike Article 7(1)(d) of the recently adopted HCCH Judgments Convention, none of them covers this scenario. What is more, Article 45(3) Brussels Ibis expressly states that the jurisdiction of the court of origin, save for certain instances of protected parties, may not be reviewed, not even under the guise of public policy.  Read more...

On the occasion of the 40th anniversary of the Austrian Private International Law Act, the Interdisciplinary Association of Comparative and Private International Law (IACPIL/IGKK) will be hosting a lecture series in Vienna, starting from 11 December 2019. The lectures will address the future role of the national PIL codifications of EU member states and the application of the Austrian Act during the last decades. Given the comparative focus of the lectures, the organisers are kindly inviting colleagues from all jurisdictions to attend and participate in the discussions. The working languages will be German and English.

A flyer with more information can be found here, the address for registration is office@igkk.org.

The rules on international jurisdiction established by EU instruments differ depending on the specific type of IP right in question.  Read more...

Out now: T.M.C. Asser: In Quest of Liberty, Justice, and Peace

Arthur Eyffinger, legal historian and former Head Librarian of the International Court of Justice, recently published T.M.C. Asser (1838–1913): In Quest of Liberty, Justice, and Peace (Brill 2019). As the name suggests, the two-volume biography retraces the life of Tobias Asser, who famously won the Nobel Peace Prize in 1911 for his contributions to the field of private international law, including the establishment of the Hague Conference on Private International Law, the initiative to found the Institut de Droit International, and his role in the subsequent creation of the Hague Academy of International Law. 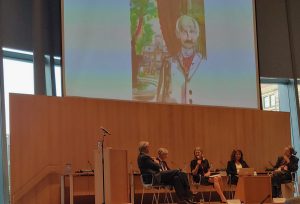 CJEU confirms that an actio pauliana is a matter relating to a contract: Case C-722/17 Reitbauer et al v Casamassima

Less than a year after its decision in Case C-337/17 Feniks (discussed here), the Court of Justice had another opportunity to consider the extent to which the Brussels Ia Regulation provides a head of special jurisdiction for an actio pauliana. In Case C-722/17 Reitbauer (decided last Wednesday but still not available in English), the Court confirmed its decision in Feniks, according to which such an action falls under Art 7(1) Brussels Ia if it is based on a contractual right. Michiel Poesen, PhD candidate at KU Leuven, has been so kind as to share his thoughts on the decision with us in the following post.

Earlier this week, the Court of Justice of the European Union found that an actio pauliana is subject to jurisdiction in matters relating to a contract, contained in Article 7(1) Brussels Ia (Case C-722/17 Reitbauer).  Read more...

Out now: 3rd edition of Hüßtege/Mansel (eds), NomosKommentar on the Rome Regulations and related instruments

Adding to the list of recent German publications on Private International Law, the 3rd edition of Volume VI of the German NomosKommentar BGB has just been published.

The book edited by Heinz-Peter Mansel (University of Cologne) and Rainer Hüßtege (Higher Regional Court of Munich) offers detailed commentary on the Rome I, II, and III Regulations, the Succession Regulation (650/2012), the two new Regulations on matrimonial property regimes and property consequences of registered partnerships (2016/1103 and 2016/1104), and on the 2007 Hague Maintenance Obligations Protocol. The authors include both academics and practitioners, with the book seeking to not only make a contribution to legal scholarship but to also provide guidance for legal practitioners working on cross-border cases.

Last week, the European Parliament adopted the highly controversial proposal for a new Copyright Directive (which is part of the EU Commission’s Digital Single Market Strategy). The proposal had been criticized by academics, NGOs, and stakeholders, culminating in an online petition with more than 5 million signatures (a world record just broken by last week’s Brexit petition) and public protests with more than 150,000 participants in more than 50 European (although mainly German) cities.

Under the impression of this opposition, one of the strongest proponents of the reform in the European Parliament, Germany’s CDU, has pledged to aim for a national implementation that would sidestep one of its most controversial elements, the requirement for online platforms to proactively filter uploads and block unlicensed content. The leader of Poland’s ruling party PiS appears to have recently made similar remarks.  Read more...

Out now: Pretelli (ed), Conflict of laws in the maze of digital platforms

The Swiss Institute of Comparative Law has just published the proceedings from its 30th Private International Law Day, which focused on digital platforms and their implications for the conflict of laws. The following teaser, as well as the volume’s table of contents, have been kindly provided by its editor and main organiser of the conference, Ilaria Pretelli:

Since its creation in the early 1990s, the World Wide Web has intensified its role and skills at too speedy pace for any sober reflection in human sciences.  Read more...